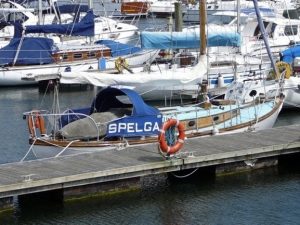 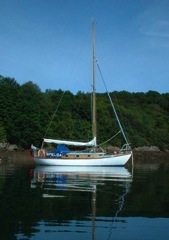 Spelga was built in 1951, Job Number 171. In 2010 Walter McFarlane wrote ‘my wife Catherine and I bought her in 1976. I believe we were the fourth owners. We undertook many cruises in the Firth of Clyde and the Western Isles, mostly with our sons and daughters as crew. We used to berth at Ayr Yacht & Cruising Club which had fore and aft moorings and a yard for laying up. In recent years Spelga has wintered at Troon Yacht Haven and lay up there. In the summer the boat lies to a swinging mooring in Tarbert Harbour, Argyllshire.

‘The mast is the original pine mast rigged as a 3/4 sloop. When I bought her the 3/4 forestay comprised twin parallel wires separated by two inches. This allowed for two jibs to be hanked on, when running for instance.  In 1990 I replaced the twin forestays with Plastimo Jib Reefing Gear. This made sailing easier as we got older and the crew left home and were generally less available. The sail areas now are main 240 square feet, furling reefing genoa 160 square feet – I do not have a spinnaker.

‘Spelga was originally fitted with a Stuart Turner 8 hp petrol engine. It would not start when hot: when transiting the Crinan Canal I kept eight cleaned sparking plugs ready and changed the plugs each time we stopped. Latterly, my father constructed an electronic ignition system which completely eliminated that problem. However, due to wear and tear and  reduction in power I eventually replaced the Stuart Turner with marinised Ford 105E. But it tended to flood the bilges with petrol so I installed the present engine which is a Petter Mini Twin AC2WM 12 hp diesel.’

Brest: the world’s largest maritime festival in photographs by Nigel Pert & Dan Houston with a … END_OF_DOCUMENT_TOKEN_TO_BE_REPLACED