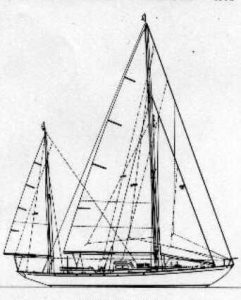 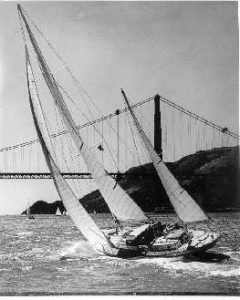 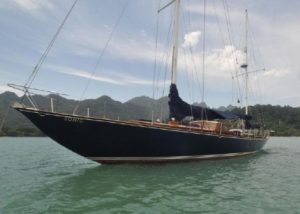 Built for LC Pasley she was originally designed as a Sonar Bouy testing vessel, and classed as a research vessel under the name of “Sonic 4”.

She has circumnavigated the world 6 times.

“My family purchased Sonic (originally Sonic 4) from Mr. Pasley in Florida 1971. My father, Arlo Nish, renamed and refurbished Sonic, in the San Francisco Bay Area. (The picture of Sonic sailing in SF Bay was taken for us. That picture still hangs in my Mother’s home.)

Four years later, in August 1975 as a family, Dad (Arlo), Mom (Marge), me, my sister, brother and one crew member left from San Francisco Bay and headed West. We returned to San Francisco after circumnavigating two and half years later.” – Gayle Nish

“My name is Bill Bezy and I owned Sonic in Hong Kong for ten or more years and restored her to a good condition.  She is an incredible sea going sail boat when maintained and many people have enjoyed her adventures. I also met Marge in San Francisco once.”

“Sonic ended up here in new Zealand in bad order. Her owner abandoned her. She could be saved”… but… “has been sold to a guy who will “plant” her on his section and use her as a land based motel unit . A sad end for her”.  – Epicyachts

“Sonic needs a lot of work. She has pride position & draws a lot of attention. There are plans to restore her outward appearance to her former glory & bestow upon her the recognition she deserves. Hardy a sad end or a garden ornament to a 67 year old lady. Everyone had equal opportunity to do something with her & no one else took the challenge . She can be picked up & moved at anytime, & at the moment is better looked after than the previous two years she sat on the hard stand.” – Warren Gillespie

Brest: the world’s largest maritime festival in photographs by Nigel Pert & Dan Houston with a … END_OF_DOCUMENT_TOKEN_TO_BE_REPLACED