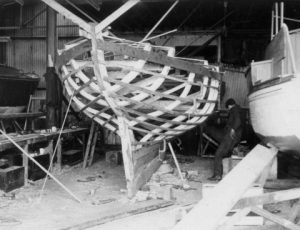 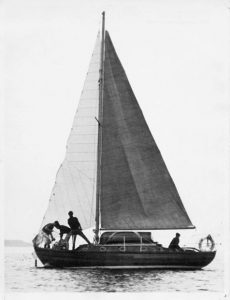 David Greenhalgh, son of the first owner of Shemdra, says that his father Robert had wanted to name her “Seaquel”, but Lloyds Register had other ideas and refused his application. So he devised Shemdra from his family’s names: SHE from Sheilagh; M for Margaret, his wife; D from David; R from Robert (himself) and A for another.

Her current owner, Jack Carroll, reports in 2012 that he bought her in 2002 – when he was a mere 70 years old. He immediately carried out a major re-arrangement below decks to provide fewer berths and more useful space. Shemdra has varnished topsides which Jack says are no trouble at all to maintain, but this is probably because he used to own a boatyard at Carrickfergus and knows how to get the results he wants.

Brest: the world’s largest maritime festival in photographs by Nigel Pert & Dan Houston with a … END_OF_DOCUMENT_TOKEN_TO_BE_REPLACED