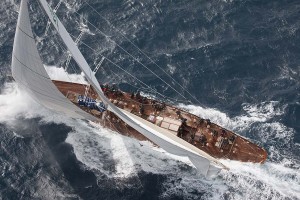 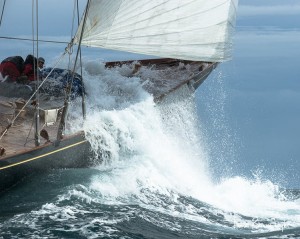 “1929: Sir Thomas Lipton, owner of Lipton Tea, decides to challenge for the America’s Cup for what will be his fifth and final time. He commissions naval architect, Charles E. Nicholson with the task of designing Shamrock V. She is built at Camper and Nicholson Shipyard in Gosport, UK.

Shamrock V is the first J-Class yacht to be commissioned and built in the UK. She is constructed of teak planking over steel frames and sports a hollow spruce spar.”

The green J had a restoration in Pendennis Shipyard that finished in 2001 where her design was modified by Dystra Naval Architects.

Watch 2 videos from the 2014 Argentario Regatta where Shamrock V, the 23-Metre Cambria and the 19-Metre Mariquita are battling it out:

Brest: the world’s largest maritime festival in photographs by Nigel Pert & Dan Houston with a … END_OF_DOCUMENT_TOKEN_TO_BE_REPLACED