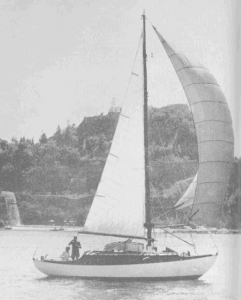 The 1948 RCC Journal tells the story of Selamat’s voyage from Port Said to England without an engine, and how all our sails were stolen in Syracuse.

“I know this boat! I’m delighted to be able to pull up current information on the internet!

Selamat (Malay for “Greeting”) was built on Ulu Bernam Estate, an oil palm plantation owned by a Danish Plantation company – United Plantations Berhad headquartered in Copenhagen. The yacht was commissioned by one of the directors, an Englishman whose name, I believe, was Edwards. It was built on a slipway just yards from my father’s office by the Bernam River. My father, Axel. J.V. Lindquist, was chief engineer for UP. Although he had no previous experience in yacht building, he was a man of many talents and participated in supervising Selamat’s construction and outfitting.  The lumber (mahogany and teak) was harvested from the jungle’s edge and floated down river to the estate’s sawmill.

I was nine years old at the time of her launching which my eleven year old brother, John, and I attended. It must have been around January 1948. At the time, my mother, Ida, was the only European woman on the plantation and was given the honour of naming the yacht.  Alas, sturdy champagne bottles were not designed to break on impact with a wooden hull. After the third failed attempt at Selamat’s christening it was decided that the bottle of Veuve Clicquot had best be taken home to my parents’ house and served at a luncheon prepared in honour of the yacht and its new owner. With little time to have it adequately chilled, it was drunk at almost room temperature, and still a bit shaken up from its bruising on Selamat’s hull, with toasts to the yacht’s good fortune! If there are any small dents in the hull by the port bow this will explain them! The yacht was sailed to Penang and subsequently shipped by cargo vessel to Port Said and, after some difficult circumstances in the Mediterranean, sailed to England. I believe she was berthed on the Essex coast – possibly Brightlingsea.

How did an ocean-faring yacht come to be built in the middle of the Malaysian jungle fifty miles upstream from the west coast? The Bernam River was quite large – a good fifty yards across at this point – and crocodile infested in those days, (but devoid of any crocs now thanks to river traffic, urbanization, pollution and – I must confess – active culling at the muzzle of my father’s shotgun and rifle). The only way in and out of the plantation was by boat or light aircraft.  An active passenger boat building program was instituted by UP and these plied the river between Jendarata, Hutan Melintang and Ulu Bernam serving many of the small kampongs between. Selamat, therefore, represented a departure from the usual program. The builders were highly skilled Chinese carpenters and craftsmen. Following the success of Selamat, a very similar (though not exactly identical) sister yacht, named Chencharu was built at Ulu Bernam.  After serving as both a working and recreational vessel for the Director of Fisheries, Mr. D.W. Le Mare, Chencharu also ended up in England. Subsequently, after an ownership and name change (to Pegasus) it had quite an illustrious career, eventually being sailed solo from Australia to USA by Mr. Brad Tinius., who renamed it back to the original “Chencharu”.  Its record (and that of Mr. Tinius) can also be found on the internet.  I believe she is now berthed in Washington State, USA.

These were the only two yachts built at Ulu Bernam. I attach a couple of old photos of Selamat. In one, she is on the Bernam River a few weeks after her launch and having completed her outfitting; the other a picture taken off the Essex coast and sent by Mr. Edwards to my father (circa mid-1950s). 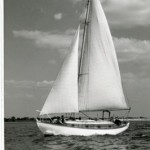 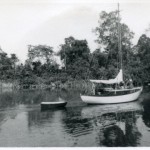 It was such a pleasure to find Selamat (and her sister, Chencharu) through a simple Google search. Brought back fond memories of my childhood.”

Brest: the world’s largest maritime festival in photographs by Nigel Pert & Dan Houston with a … END_OF_DOCUMENT_TOKEN_TO_BE_REPLACED