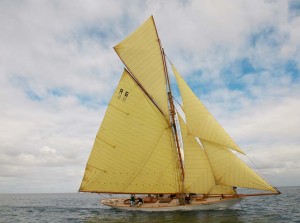 At Rockport Marine in spring 2004.

“What a wonderful yacht this was, she was fast even with Joe Griffins’ restrictive rig . ( a mainsail and Jib) . Recall giving the yacht ‘Solo’ a run for its money one day until he broke out the spinnaker which I thought was most unfair. Around 1962 I sailed on her as a deckhand and some of Joe’s other boats, Sea Gypsy and Kurrawa 11 . Sayonara  was rigged by Joe so as to avoid loads becoming excessive on the stays and rig. The sheets were restricted so that running downwind one had to often jibe.
As I recall Sayonara was crewed by a skipper and two hands. Joe’s skippers were well trained and from what I saw were good at it.
The drill was, if I recall correctly, to set up and wash the decks on the mooring in Lavendar bay, then start the archaic diesel which had been fitted, and proceed to the Mcmahons point wharf and pick up the passengers for the day..hoist the sails ( no winches so all were bounced on by hand!) and away you went  down the harbour. A spot for lunch was chosen by the skipper, like Chinamans beach or forty baskets , where the anchor was dropped and we rowed the passengers ashore and back in the trailing dingy.
The rig had runners which had to be released when going about to help support the mast.
One day we had just got beyond the heads and heading out to the edge when the wire rope runner gave away.. We quickly took the load off and turned the vessel about and ran back into the harbour. By some artful sailing and good luck with wind direction we were able to return to the wharf without having to test the jury rig effected by the skipper on the parted runner.
The skipper was a chap called Roscoe?
Joe was a cool calm and canny man who often told me that “the sea had no friends”and not to forget it. He knew the rules and was not afraid to demand his right that steam had to give away to sail which prevailed at that time!
On returning to the wharf , decks were hosed down and sails stowed and vessel secured to the mooring before rowing back for a cuppa and a scone prepared by his wife Olive. Night cruises attracted a 10 shilling reward to the deckhands.”

Brest: the world’s largest maritime festival in photographs by Nigel Pert & Dan Houston with a … END_OF_DOCUMENT_TOKEN_TO_BE_REPLACED