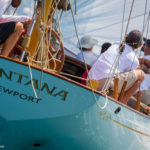 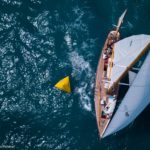 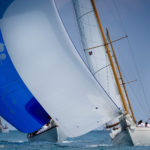 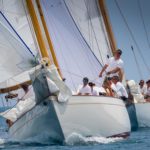 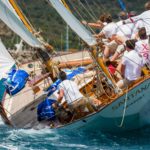 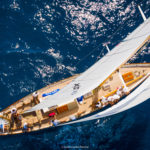 Santana, S&S Design No. 59, was built by Wilmington Boat Works and launched in 1935. Once referred to by  Humphrey Bogart as the love of his life, Santana was extensively restored to her rightful glory by LMI and  East Passage Boatwright’s and re-launched in May of 2016.

“God is alive and sailing on the Santana” (Under Charlie Peet’s ownership five men were rescued from a sailing vessel inbound from Los Angeles, to this day one of them carries a laminated card within his wallet with the saying inscribed.)

“While most people know that Bogie and Bacall had a great love affair, probably fewer know about my father’s other great love–sailing. Specifically, it was with his 55-foot sailing yacht. . . . The sea was my father’s sanctuary.” (Humphrey Bogart’s son Stephen, wrote in his autobiography)

Santana was named after the infamous Santa Ana Winds of California, and was originally conceived as a yawl by Olin Stephens, but Mr. Stewart insisted on a luxury staysail schooner built with racing in mind. 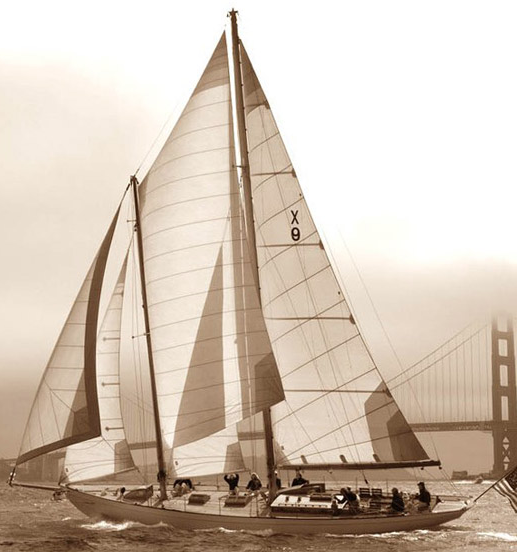 Santana originally launched and rigged as a schooner

Years later owner George Brent re-rigged her as a yawl, but wanted to keep the existing mainmast, of which S&S recommended a larger main. With her new rig Santana proved to be more suited for the strong winds that she was named after, but challenged in lighter winds.

Owners Paul & Chrissy Kaplan of Keefe Kaplan Maritime (KKM) restored and re-rigged Santana once more back to a schooner.

Current owners recently completed a major restoration of 55ft S&S Santana, a hull and deck rebuild and rig conversion from schooner to yawl.

Brest: the world’s largest maritime festival in photographs by Nigel Pert & Dan Houston with a … END_OF_DOCUMENT_TOKEN_TO_BE_REPLACED