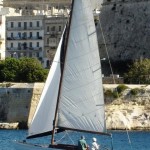 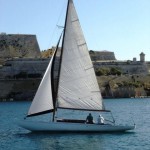 ‘Saluki’ is named after the oldest known breed of dog, the Arabian gazelle hound, famous for its agility, grace and symmetry.

She was built in Germany some time between 1931 and 1934 by Abeking and Rasmussen and originally named ‘Seejungfer’.  She was one of a large number of boats in Kiel appropriated by the British Forces at the end of the Second World War. They became known as ‘Windfalls” because of the way they were acquired. At the time it was said that the Russians appropriated ‘scientists’, the Americans ‘women’ and the British ‘boats’.

Seven of these boats were shipped to Malta;

‘Suna’ – ‘anus’ in reverse – was sailed by the army doctors and is now based in the UK.

‘Falkland’ – belonged to the RAF.

Today ‘Saluki’ is the only surviving Windfall in Malta and a living page in the yachting history of Malta.

In the 1950’s these boats were sailed and raced extensively by members of the Army, Navy and the RAF sailing clubs.

‘Saluki’ can boast of an active and distinguished past.   In 1951 there was a 30sq.m class race Round the Island won by Colonel Garret in ‘Saluki’ .  Also in 1951 ‘Saluki’ together with three other windfalls, took part in the first Malta-Syracuse race.  In the following year ‘Saluki’ was one of the six Windfall yachts taking part in the Malta-Syracuse race.  The race was won by ‘Angela’, skippered by the redoubtable Captain John Illingworth, closely followed by ‘Saluki’.

Michael Cudmore in his book “The Windfall Yachts – A Legacy of Goodwill”   describes a Malta Windfall highlight which took place in 1954 when the island was visited by HM The Queen and the Duke of Edinburgh in the brand new Royal Yacht ‘Britannia’.  Orders from the Commander in Chief included the entry “0840 Windfall yachts sail past and salute”.  The whole Mediterrean fleet was in two columns either side of ‘Britannia’ approaching Malta when seven 30sqm yachts ‘Flandern’, ‘Suna’, ‘Gernet’, ‘Phoenix’,  ‘Falkland’, ‘Saluki’ and ‘Angela’ sailed in line between them, only a cable from ‘Britannia’.  A loyal message was hoisted and later Prince Philip sent a signal “I enjoyed seeing the yachts this morning: they looked very smart.  Thank you for your message.  Admiral RNSA”.

In 1955 ‘Saluki’ was first in all the offshore races held that year. These included the Malta-Syracuse race and races to Tripoli and Catania.  Lt. Col. Borda on ‘Saluki’ went on to win the next two Malta-Syracuse races in 1956 and 1957. He was given the first Triple Challenge Trophy, known as the Greek Coins, originally presented by the Circolo Juvenilis of Syracuse in 1951.  In the years between 1956 and 1959 Lt  Col. Borda went on to win many races including a race to Tunis which took place in September 1957.

In the early 1960’s these boats were sold to private owners. ‘Saluki’, her name changed,  was sold to various owners who altered her extensively until she was practically derelict and in serious danger of being broken up and eventually burnt.

A complete rebuild program undertaken by its present owners began in the spring of 2000. Initially, the problem was the identification of the boat because of her state and the changes she had undergone over the years. Eventually her origins were traced and a set of the original designs obtained from her builders.

Now, ‘Saluki’ has been given back her original name and restored to her pristine condition.

The restoration of ‘Saluki’ has been long and extensive. Her stern has been rebuilt, and the frames, planking, keel, deck, wooden mast and boom have been repaired or replaced.

Brest: the world’s largest maritime festival in photographs by Nigel Pert & Dan Houston with a … END_OF_DOCUMENT_TOKEN_TO_BE_REPLACED