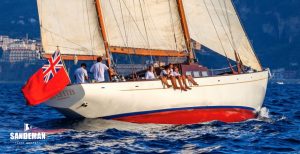 “I am not capable of making boats only for money… I build boats with my heart. I dream of them at night. I stroke them… like a poet does his verse. To me, every boat is like a work of art. It can’t leave my shipyard until it is perfect” – Cesare Sangermani, 1974

To require rescue from close to oblivion is a rare fate for a Sangermani; just the name is enough to stir the imagination as, for example, Stradivari might. It certainly wouldn’t have been imagined in 1956 when Guido and Silvio Pellerano commissioned Cesare Sangermani Senior to design this superb 73ft RORC Class I cruiser-racer ketch. When launched at Lavagna, east of Genoa, in the spring of 1957, SAHIB became the second largest yacht designed and built there under the direction of Cesare and Piero Sangermani. Many more would follow.

A later owner was Amalia “Maly” Levi Da Zara Falck, wife of Giovanni Falck, second son of the founder of the huge Italian steelmakers. Amalia lived at the beautiful Montelattaia estate near Grosetto, Tuscany, and sailing tours would have been in the waters of the Tyrrhenian Sea from SAHIB’s home port further north, Marina di Carrara. Her son Giorgio Falck was a Sangermani client: a prolific and adventurous yacht owner, and veteran of three Whitbread Round the World races in GUAIA (1973-74), ROLLY GO (Sangermani, 1981-82) and GATORADE (ex NZI Enterprise, 1989-90).

In 2015, SAHIB, with her unmistakable “three dots” (Morse code “S” for Sangermani) cove line decoration proving her provenance, was found in a distressed state at the port of Agropoli, south of Naples, and the rescue process described elsewhere here commenced. If ever a yacht deserved it, it was this Sangermani gem. 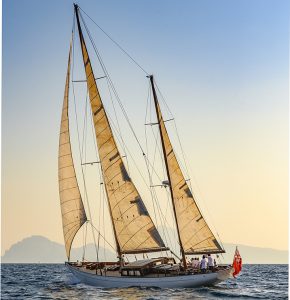 It was interesting, earlier this year, to learn a bit more about the Sangermani yard and some of their fabulous post-war creations like the record-breaking Gitana IV and this, a similar yacht that preceded it. The restoration at the 260-year-old Legno Aprea was a big one, including a complete re-deck, much other structural work and a new interior. The hull is still largely in the original mahogany planking, and the interior really sets the bar for any yacht below decks.” CLASSIC BOAT

Brest: the world’s largest maritime festival in photographs by Nigel Pert & Dan Houston with a … END_OF_DOCUMENT_TOKEN_TO_BE_REPLACED