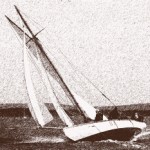 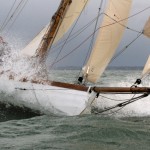 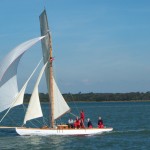 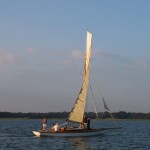 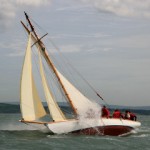 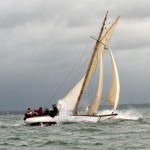 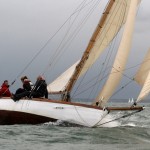 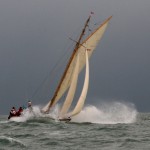 ‘Rosenn’ is the last existing Solent One Design, one of the first One Design classes created.   22 were built between 1896 & 1897 for members of the Royal Yacht Squadron and the Island Sailing Club.   Rosenn, formally Eilun, is still racing and winning in the Solent.

Completely restored and rebuilt in 2010. For more read below: As one of 22 Solent One-Designs, Eilun was built By J Samuel White at Cowes to an in-house design in 1896, the same year that the yard built the 85-foot steam yacht, Scud. The class raced at Cowes under the Royal Yacht Squadron and the Island Sailing Club for more than a decade, but the owners began to be seduced by the newly formulated Metre-boat rule and the boats were sold. Cutter rigged with a gaff mainsail and jackyard topsail, she now sports a light genoa for use in winds under ten knots, and, in line with her original sail plan, an asymmetric spinnaker.

The Solent One-Design was the first ever one-design class. Eilun went to France in 1908, where Lloyds Register records she was re-named Rosenn and remained on the Atlantic coast in various harbours until after the Great War. She returned to England in the Twenties and spent many years on or around the River Crouch.  At times she was chartered one notable charterer was John Profumo but used as a cruising boat. During her time on the Crouch, she underwent a major restoration – her owner was a shipwright and was based up river at Fambridge until she went on the market to allow her owner to purchase a boat more suited to long-distance cruising.

In May 2007, Rosenn was purchased by Barry Dunning and Bob Fisher, who, as part of the purchasing deal, arranged for her to be brought from the Crouch to Lymington. It was at this point that Rosenn reverted from cruising boat to racing boat – her new owners were more interested in that aspect of the sport and a gradual metamorphosis began. In the first season this amounted to replacement of worn items of rigging together with minor changes of gear. The owners agreed that costs should be strictly limited and proposed that if it wasn’t in one of their ditty-boxes, or from one that was freely available to them, it couldn’t be had! The generosity of friends who sailed with them produced all sorts of sails and equipment. Sails were evaluated and Bob, at least, was delighted that the working sails came from a loft in his old hometown of Brightlingsea, but realised that their life was limited and would need replacement in a few years, which is why the owners approached Pete Sanders when they decided, early in their second year of ownership, that the light weather performance might be improved with a Code Zero headsail.  Despite the generous mid-season discount, they are still whingeing about the money they had to spend, but each time the sail is used they smile. Thursday evening racing is a must, together with local regattas on both sides of the Solent and Rosenn is a competitor in the Spring and Autumn series at Lymington, where she enjoys racing particularly with the other Old Shitters, as the gaffers are lovingly known.

At the beginning of the third year of her life in Lymington, Rosenn was invited to the UK Register of Historic Ships, where she joins such worthies as HMS Victory, Britannia, the Mary Rose, and Rona. Barry and Bob sometimes feel that this is like owning a Grade 1 listed building, but thankfully without the limiting restrictions when renovation is mentioned. However, it did drive them to the first stage of cosmetic restoration, because they were invited to take Rosenn to the Southampton Boat Show to represent the Historic Ships Association.  By pure chance, she was berthed next to the catamaran that Geoff Holt proposes to sail across the Atlantic and which was visited by HRH Princess Anne. The Royal Lymington YC’s patron stopped to talk with the owners after she had inspected Holt’s boat. 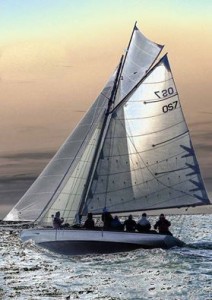 Stage one of the restoration was limited by time to the topsides and brightwork. The hull was stripped to bare word, steam-cleaned, sanded and given a coat of clear epoxy resin. The seams, which had been raked out, were filled with epoxy putty and the whole given another coat of epoxy before the high-build filler was applied.  The topsides were finished with two-pot white epoxy paint. The brightwork was cut back hard and re-varnished.  Stage two will take place under cover during the winter. In the meantime, Rosenn is back racing and while unsuccessful in the Potter Ship, crossed the Solent the next day and lifted the Turkey Cup. 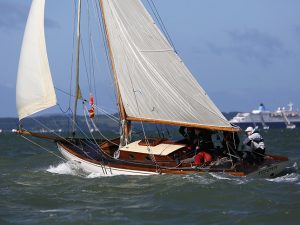 Rosenn during a Round the Island Race in 2016

Brest: the world’s largest maritime festival in photographs by Nigel Pert & Dan Houston with a … END_OF_DOCUMENT_TOKEN_TO_BE_REPLACED