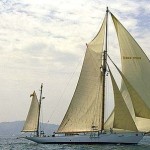 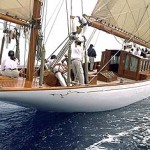 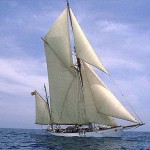 Designed and built for Charles Hellyer of Yorkshire. 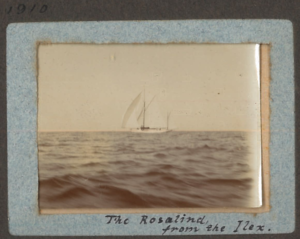 The Rosalind captured from on board Ilex, 1910

1912: Sold to Oswald Cecil Maguiac of London(member of the Royal Yacht Squadron-RYS) who owned and cruised with ‘Rosalind’ over the next 22 years.

1936: Sold to J B Darlymple who moored ‘Rosalind’ discreetly in Scotland during the Second World War to keep the Admiralty away from her precious lead keel.

“My Father, James P Stove, was the radio wireless operator (‘Sparks’) on the yacht ‘Rosalind’ for the first part of the expedition in June 1936 from Glasgow to Leith, crossing the North Sea to Cuxhaven and then through the Kiel Canal to the Baltic.  The Rosalind was berthed at Gdynia while the camera crew went to make a film of Warsaw.  On the return sailing across the North Sea severe storms were encountered which caused some damage and necessitated repairs in Leith.  The round the Word expedition was abandoned.” Information courtesy of James Stove. 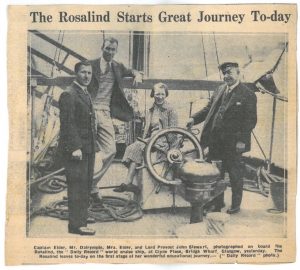 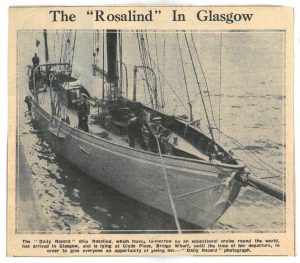 The Rosalind in Glasgow

1948: Sold to Lt. Col C C Morrison who sailed her around Spain. ‘Rosalind’ subsequently went into Spanish ownership, was renamed ‘Rosalinda’ and underwent considerable modernization – a ketch rig with her bowsprit and bumpkin removed.

Brest: the world’s largest maritime festival in photographs by Nigel Pert & Dan Houston with a … END_OF_DOCUMENT_TOKEN_TO_BE_REPLACED