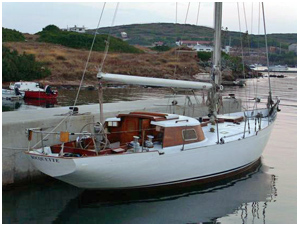 Designed to beat the Sparkman & Stephens designed Clarion of 1963, the aptly named Rocquette was raced by Peter Nicholson throughout 1964. In her first year, she won the Gold Roman Challenge Cup in the Round-the-Island Race against a fleet of 325 boats, an outstanding achievement, and went on to win the Britannia Cup, the New York Yacht Club Cup, and the Coronation Bowl.

In 1966, Yachting World Annual described Rocquette as the first of “a distinctly new type of offshore racer” and her design led to later Peter Nicholson yachts such as Quiver IV and Noryema IV, who were both part of the victorious British Admirals Cup team of 1965, as well as influencing the Illingworth-designed Gypsy Moth IV of Sir Francis Chichester fame.

Brest: the world’s largest maritime festival in photographs by Nigel Pert & Dan Houston with a … END_OF_DOCUMENT_TOKEN_TO_BE_REPLACED