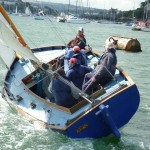 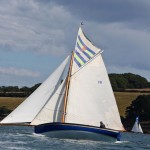 ‘Rita’ is the original Heard 28 ,the first GRP hull made by Terry and Martin Heard actually for themselves as a Oyster Dredging boat in 1972.    She was based on a wooden boat they built for a customer which was was called ‘St. Meloris’ (St. Mylor).  This boat was fully fitted out with a cabin and raised coachroof.   She is now believed to be in the Carribean.

The hull was so sucessful that Terry and Martin then made the original 28ft. mould to the same lines. The first hull out was then named ‘Meloris’ which then oyster dredged for several years before been bought by John Watkins (Watty) and renamed after his mum, ‘Rita’.  Watty raced her for several years with great sucess, until she was bought by Paul Pullen at Mylor Chandlery who gave her a complete overhaul and became one of the competitive racing boats.

Around 2005 she was sold to David Noakes of Falmouth who renamed her ‘Moonlight’. She then raced for a few years until David started working overseas at which time she lay forlorn under the trees near Islington Wharf.  Spotted by Watty, he wanted to see her sailing again, so along with John Peters they bought the boat in 2010.  The boat’s name reverted back to ‘Rita’.  New mast and bowsprit from Nobles, and gradual replacement of the original sails by Penrose Sailmakers.  ‘Rita’ came back on the racing circuit, with John P. at the helm in the spring of 2010.

Brest: the world’s largest maritime festival in photographs by Nigel Pert & Dan Houston with a … END_OF_DOCUMENT_TOKEN_TO_BE_REPLACED