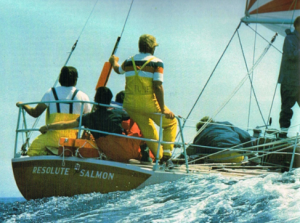 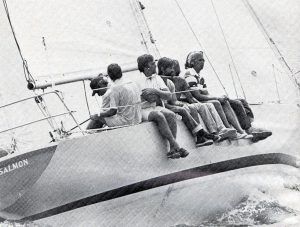 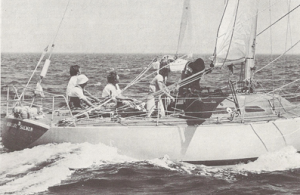 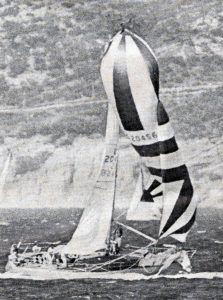 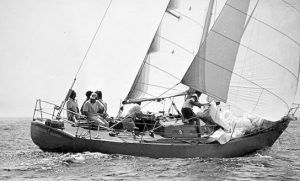 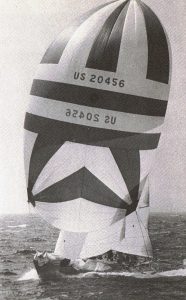 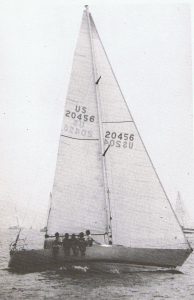 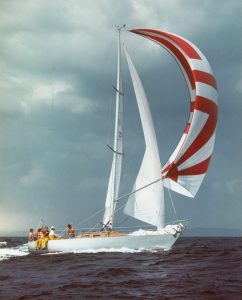 Resolute Salmon won the 1976 One Ton Cup held in Marseilles. A big hefty One Tonner she was able to offset a poor showing in the ocean race finale by amassing a strong points advantage from her convincing results in the previous four races. Resolute Salmon flew the US flag for her One Ton Cup campaign, although she was Italian owned, had been built in France and was rigged and worked up in Cowes, England.
She was considered to be the most radical of the 43 boats that comprised the 1976 One Ton Cup fleet. She represented the polar opposite to the Farr boats in every way. Firstly she was a centreboarder, to take advantage of a previously unexposed loophole in the IOR, with stability obtained through internal ballast in a deep hull, and combined with a large engine. The centreboard approach was popular in the shallow cruising grounds of the east coast of the US, and gained a benefit under the IOR (through a negative DC measurement) to recognise their usually slower shallow keel/centreboard configuration used in such waters. However, when designed as an efficient dinghy-style daggerboard (that weighed just 250lbs), the foil provided a more effective lifting surface, and one that could be retracted on downwind legs for less wetted surface.

Secondly the midship depth of Resolute Salmon was carried well forward into a very deep forefoot. The full forebody moved the bow wave forward and the corresponding stern wave further aft. By filling in the stern overhang, the lee quarter wave was delayed and, combined with a beamy powerful hull shape, the yacht became quite stiff to windward which allowed her to carry her lofty masthead rig.

While Resolute Salmon was a heavy displacement yacht (some 14,000lbs compared to the 8,400lbs of the Farr yachts), she was very lightly built in Western Red cedar, with carbon fibre reinforcing. This meant that a large amount of internal ballast had to be carried to achieve her flotation marks, which provided a very high ballast ratio. This ballast took the form of two giant paving slabs sitting on the floor of the cabin just behind the mast. The combination of these various design characteristics, helped by a highly professional crew led by Dick Deaver, who first saw the yacht just three days before the series, meant that the yacht was particularly fast in the light winds and sloppy sea conditions that prevailed off Marseilles.

While quick in light airs, however,Resolute Salmon was an absolute handful downwind in any kind of breeze and big following sea. In such conditions, Resolute Salmon had a very nasty habit of trying to turn herself inside out in violent broaches. While she had a high ballast ratio, as Farr commented at the time the power of that ballast was just below the centre of buoyancy. This meant that she had to heel ten degrees or more before the ballast stiffened the boat up. Resolute Salmon would therefore start a rhythmic roll very easily and it got to the point where the boat was out of control before the hull became stiff enough to support it.

Nevertheless, Resolute Salmon was able to post some solid placings in the windier races of the series, with fourth in the first and fourth races, and winning both the abandoned and resailed second race and the middle distance race. Although she had established a solid points buffer going into the long ocean race, Resolute Salmon was one of several yachts that failed to properly navigate their way around the Borha meterological platform, some 100 miles out into the Mediterranean Sea. Resolute Salmon and others were too far from Borha to see it in the hazy conditions and sailed past it and carried on out to sea. They salvaged a 20th place which was enough to win the Cup with a 4/1/1/4/20 scorecard. The defending champion, the Peterson design Pied Piper finished second, while another US yacht, the Kaufman designed America Jane III completed the US podium sweep in third.

Resolute Salmon does not appear to feature in any subsequent regattas – she did not travel to Auckland to defend her title in 1977, nor to Flensburg, Germany, for the 1978 regatta. Later changes to the IOR meant that centreboards were no longer a viable proposition, and this heavy style of yacht also became outdated by the time of the 1979 series.

Above information courtesy of rbsailing.blogspot.com

2016 – Bought by Italian Sailmaker Beppe Zaoli with her first regatta during Vele d’Epoca, Imperia in September.

Photographs indicate that she is still maintained in sailing condition and still sports her original centreboard.

Brest: the world’s largest maritime festival in photographs by Nigel Pert & Dan Houston with a … END_OF_DOCUMENT_TOKEN_TO_BE_REPLACED