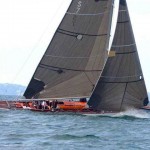 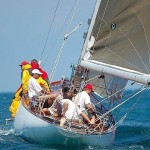 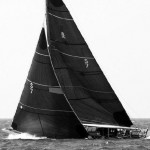 She was first owned by Gustav Olsen , one of the builders. She was raced out of KNS from 1935 until the early 1960’s, when the original owner died and she was sold to California. There she was converted to a cruising boat, where she sailed, with one owner, until 2005 when she was purchased and brought to Toronto, Canada.

Ranja was then converted back into racing mode. Since 2005, she has had new winches put on her, the deck has been resealed, and various planks have been replaced below the waterline. She had new electronics purchased in 2006.

She is built of mahogany and has a beautiful varnished mahogany cabin. The interior of the cabin is fitted with berths and cushions, with many amenities for cruising.

Racing out of the Royal Canadian Yacht Club, she has sailed well, winning the club season
championship as well as the Lake Ontario championship and the prestigious Gooderham Trophy.

Brest: the world’s largest maritime festival in photographs by Nigel Pert & Dan Houston with a … END_OF_DOCUMENT_TOKEN_TO_BE_REPLACED