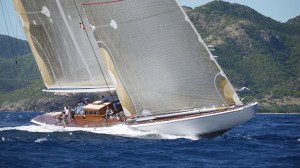 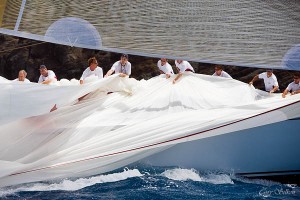 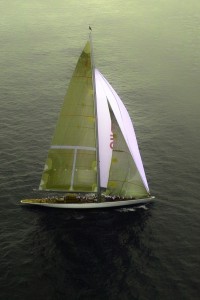 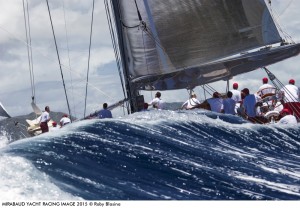 The history of Ranger (www.sy-ranger.com)

Harold Vanderbilt’s Ranger was born from the challenge made by Sir T.O.M. Sopwith (ENDEAVOUR) in 1935 . During the 1935 season racing at regatta’s along the UK’s South Coast, Sopwith announced that he would build a new ENDEAVOUR II to challenge for the America’s Cup.

This challenge was controversial for several reasons. Firstly, business climate was getting more and more difficult, both in the UK and the USA. Any decision to build and challenge could be viewed as extravagant in these times, especially with the looming political problems in Europe that eventually led to the second World Was.

Secondly, the J Class Yachts suffered so badly from dismasting, with the mast at risk in anything other than the lightest of winds. This was so costly that Sir Richard Fairey (CEO of Fairey Aviation, and owner of Shamrock V at the time) even proposed that he would make a challenge in the new ‘K’ Class – smaller, less expensive to build, with a more manageable rig.

ENDEAVOUR II was launched in 1936 and competed alongside her sister at numerous UK regattas, where she began to prove beyond doubt that she was the fastest of the possible UK Challengers.

Meanwhile, Vanderbilt, the Owners of so many previous Defenders, contacted yacht designers Sparkman & Stephens to discuss the possibility of a new J Class yacht. It was agreed that Starling Burgess and Olin Stephens would each present four designs that would be tank tested and Vanderbilt would fund the operation.

The brief was to design a maximum size J Yacht under the Universal Rule with a waterline length of 87 foot, moderate beam and considerable balasting the forefoot to improve stability.

In due course , and with little time available, the 8 designs had models completed , together with models of ENDEAVOUR I and RAINBOW, the previous competitor yachts. These were the first really scientific tank testing program, where accurate measurements could be taken and clear determination of performance greed.

Design 77C created by the very young but innovative designer Starling Burgess clearly showed superiority on most points of sailing over all the others tested, particularly in low wind speeds. However, because of its radical lines and looks, it would never have been except for the proven results.

By Autumn 1936, all lines were confirmed and the decision to build had to be taken. With an offer of build at virtual cost price from Bath Ironworks, Maine, and reduced design fees from Sparkman & Stephens, Vanderbilt agreed to proceed.

The World’s press were enthralled with the battle of the leviathans – the biggest J Class yachts to be built. Sir T.O.M. Sopwith exploited all of his vast design knowledge from his aircraft design & construction comp
any to build ENDEAVOUR II, whilst Howard Vanderbilt invested in scientific tank testing of previous and new designs. This was followed by avid readers in newspaper reports such as the Illustrated London News:-

Built from high grade steel – flushed rivet plating, RANGER was launched on 11th May 1937, with very little time to work up to the trial races for defense of the Cup. Disaster struck on the delivery trip from Maine to Newport when rigging parts fell from the mast whilst under tow. Nothing could be done at that stage of the delivery and the top 30′ broke off.

Fortunately, a new aluminum mast built for RAINBOW was loaned to the project and used throughout the Defender series until RANGER’s mast could be repaired.

RANGER went on to prove conclusively that she was the fastest of all the American yachts, winning almost every race in the Defender work up series and Defender selection series.

There were two important changes for this Cup series.
Firstly, because of the serious problems keeping the 165 foot masts from falling over the side, the rules were changed to allow for masts to be heavier by ratio in the larger J Class yachts. This enabled new masts to be built stronger than ever before.

Secondly, it was now possible to announce the Challenger and Defender yacht up to 30 days prior to the Regatta. This enabled the British challenge to bring with them both ENDEAVOUR I AND ENDEAVOUR II to the USA and work up the yachts together, finally declaring ENDEAVOUR II as the Challenger.

RANGER went on to win four races (our of a possible seven) conclusively against ENDEAVOUR II.

After extensive design and development of the plans by naval architects Reichel/Pugh, construction started at Danish Yacht Boatyard in early 2002.

Her rebuild was completed in December 2003 and she departed Denmark in early January 2004.

Brest: the world’s largest maritime festival in photographs by Nigel Pert & Dan Houston with a … END_OF_DOCUMENT_TOKEN_TO_BE_REPLACED