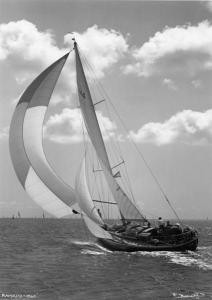 Built for the Admiral’s Cup for Selwyn Slater, her biggest opponent was Rod Stephens.  A statement of the time: “I will Ramrod Stephens next race!”

Together with the famous ‘Myth of Malham’ and ‘Griffin II’ of the Royal Ocean Club the British team won with 135 points with the Netherlands in second place with 123 points.

“Ramrod was owned by the Colchester Scout Sail Training Scheme, latterly known as Scouts Offshore through the 1970 to the late 80’s, early 90’s. During this time she was based in West Mersey on the east coast. The original petrol engine was replaced with a Diesel engine.
She sailed in all of the STA tall ships races whilst with the scouts.
She was sold to a Dutch? guy i think but not sure. His intention was to restore her to full glory”.

Brest: the world’s largest maritime festival in photographs by Nigel Pert & Dan Houston with a … END_OF_DOCUMENT_TOKEN_TO_BE_REPLACED