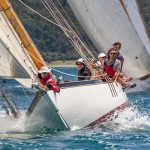 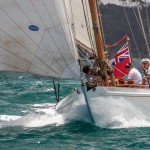 Auckland dentist and successful yacht racer A.T. Pittar changed allegiances from the Bailey yard and ordered from Logan Bros. a fast 36 foot linear rater, intended to be raced in Sydney during the 1900 Intercolonial Regatta.

Launched as Rainbow on 17 November 1898, many referring her design heritage to the Britannia model after the GL Watson designed cutter for the Prince of Wales, which had been performing spectacularly well since launch in 1892.   After some tune up races in Auckland, she was shipped to Sydney on the Waihora in mid January 1900 where she was raced by Pittar and his regular Auckland crew, with the addition of Arch Logan, and several local Sydney sailors.

Information courtesy of The Classic Yacht Association Of New Zealand

Since the 1950’s she has been owned by the Dimmock family, who bought her from Leo Bouzaid.   In 2005 she was bought by a Kiwi five-member syndicate of Brad Butterworth, Hamish Ross and David Glenn who financed a full restoration.   She was launched on 16th November 2007 and is one of Arch Logan’s big four: Rainbow, Iorangi, Ariki & Rawhiti.   In the 2008 Lindauer Classic Yacht Regatta she achieved 3rd in the highly competitive large gaff division.

Brest: the world’s largest maritime festival in photographs by Nigel Pert & Dan Houston with a … END_OF_DOCUMENT_TOKEN_TO_BE_REPLACED