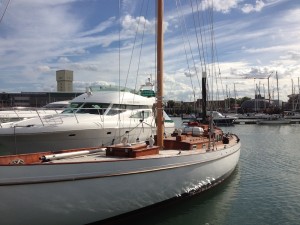 With new mast and rigging which returns her to the original Reimers fractional rig configuration, 2015

Used as a sail training vessel for the Royal Engineers and sailed in the Baltic.

“Being in the military in the early 70’s I had the singular privledge of crewing for Lt Colonel Townsend, Skipper of Ragna R, in 1972. We made the journey from Kiel to Sweden, Denmark and back to Germany, travelling westward through the Gota and Trollhatten Canals emerging in Gothenberg, then west to Aarhus, finally returning to the BKYC. Such a memorable time. Would love to see Ragna again, if not I would like to find a library picture, if anyone knows an archive source. Stan (Townsend) said he had never taken the vessel on this journey and was quite anxious, but apart from the many locks, storms on the Vattern and Vanern we were victorious, managing to sail under the bridge at Gothenburg at low tide avoiding a mast collision. Anyway, happy days, hardly a mis-spent youth! Certa Cito” – B Murphy.

“I crewed the Ragna R in the Baptist in 1976 while serving with the RAPC App college, I can’t remember the name of the skipper /owner but I think he might have been a retired army officer. It’s nice to see she is still going and I can remember my 2 weeks in the Baltic as if it were yesterday. One vivid memory was sailing the boat in a force 7/8 and the skipper somehow falling overboard and receiving an horrific rope burn to his hand. Somehow we managed to get him back on board!” – Ross Seaman. 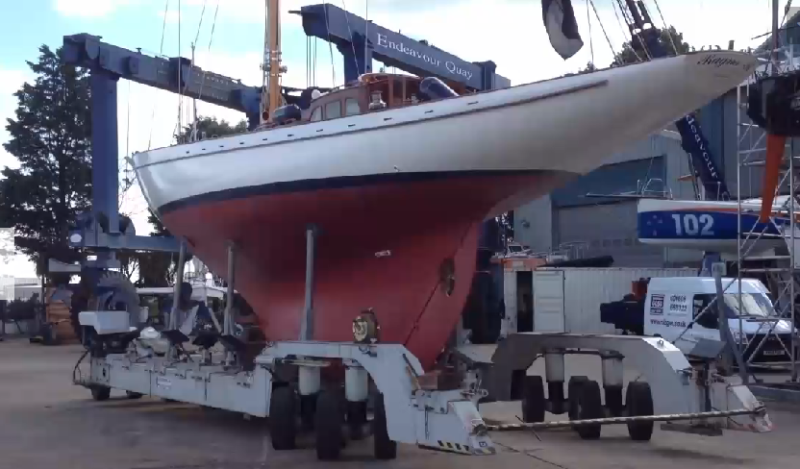 She is coded for commercial use under the UK MCA Code of Practice for Small Commercial vessel.   In 2010 she was berthed in St Katharine Dock by the Tower in London and only used privately.

2018 – Ragna R is now berthed in Haslar Marina, Gosport and is now exclusively for recreational and private sailing. After her refit of new mast and rigging, her sail wardrobe was replenished with new mainsail, no 1,2 and three foresails plus a new Cruising chute which with the original spinnaker completes her recent refurbishment.

Brest: the world’s largest maritime festival in photographs by Nigel Pert & Dan Houston with a … END_OF_DOCUMENT_TOKEN_TO_BE_REPLACED