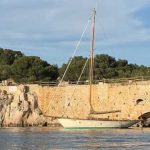 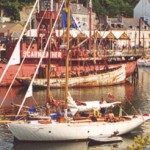 Built for the gentry of France.

Words from the yacht’s site.

She is old but in a very good shape, strong and mostly original inside and out. We do have the original documents from her launching in 1935 as well as from the design and building process. She is a one of a kind build for a Monsieur L Babin from Nantes under Lloyds requirements.
From what I know she was kept in the Mediterranean with Toulon as the home port until the seventies. She was also used as a charter yacht. Then she stayed in the Golfe de Morbihan up until the eighties when a boatbuilder from England bought her and restored her.
She has crossed the Atlantic at least once, and participated at the Brest Festival in 2000 as well as the 2001 America’s Cup Jubilee.

What sets her apart from other yachts of her time and size is that she is almost flush decked, but has a full cruising interior. She still has the original 14tons of teak, oak, acacia and lead. Her original interior is basic but functional. The rigging is not original. She still carries the cutter rig but the boom has been shortened and roller furling has been added. As we usually sail her with only two we have to keep it that way. She sails pretty stiff, so usually the deck only gets wet up to the mast, even in force 6 winds.”

Brest: the world’s largest maritime festival in photographs by Nigel Pert & Dan Houston with a … END_OF_DOCUMENT_TOKEN_TO_BE_REPLACED