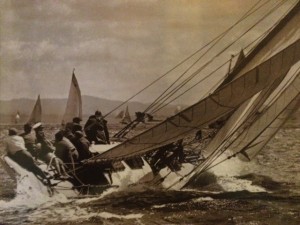 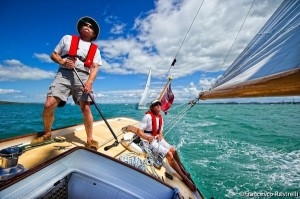 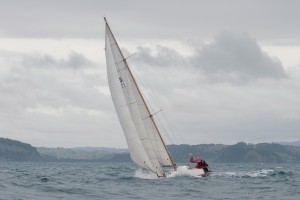 Mr. W. P. Endean Senior, a barrister and solicitor of Auckland, had been trying to acquire the Onelua since 1914, the year the King of Tonga had her built by Charles Bailey Junior. After W.W.I, and having unsuccessfully visited the islands to persuade the Royal family to sell her, Mr. Endean returned to Auckland and asked Charles Bailey Junior to design and build a 43 footer.

In the Auckland Star on Saturday 23rd June 1923 Speedwell, the reporter for Aquatic Sports, wrote:
“It is a very long time since “Speedwell” had the pleasure of viewing a modern type of yacht under construction.  A visit to the yard of Mr. C. Bailey this week showed the new 8-metre yacht which the firm is building for Mr. Endean to be well advanced………… It is hoped that this boat will be the forerunner of others, and that the class having been once established will find others following to help re-establish
the world-wide reputation of Auckland yacht builders.

Prize was eventually launched on the 27th October 1923 and caused quite a stir amongst the yachting community. Her principal dimensions being 43 * 31 * 92 * 66 Her draft was later increased to 7’4” and therefore waterline length also increased, in the late 1920s. She was named after one of the famous Q Ships, HMS Prize, a submarine hunter in the First World War, in which Lieutenant Commander W. E. Sanders, of Takapuna in Auckland, won the Victoria Cross.Mr. Endean decided to sell Prize during W.W.II and Bressin Thompson paid Pds.700 for her taking over the custodial responsibilities in 1943.

Many racing successes followed. Possibly the most notable of which was breaking Moana’s record for the Balokovic Cup in 1947.  Prize’s new record was not bettered for many years and then only by the very much larger Rawhiti (53). She in fact also won the race the previous year. The replacement of the gaff rig with a modern Bermudan rig in 1949 saw 300 cwt removed from aloft. This single act stiffened her significantly and at the same time properly balanced her for sailing in all conditions. In the mid 1950s Prize won the Royal New Zealand Yacht Squadron points prize five times, four of them consecutively in the 2nd Division: 1953/54, 1955/56, 1956/57, 1957/58 and 1958/59; a feat not bettered to this day.

In 1959, the original Oregon Bermudan spar was replaced with a lighter Spruce mast and the rig changed from three headsail to two headsails.  This spar is still in her today. The changing of the rules governing spinnaker size by the R.N.Z.Y.S. brought Prize’s racing career to an abrupt end in 1976. Bressin and his wife Beth went cruising and continued to do so for the next 16 years. They were often seen around the Hauraki Gulf with family and friends enjoying the cruising grounds that have been home to this fine ship for so long.

After Bress’ stroke in 1993 his son, Chad took over the role of sailing master, preparing her for her 70th birthday later that same year. It was quite an occasion with over 120 early crew and friends joining in on the celebration at the National Maritime Museum and at a function at the Royal New Zealand Yacht Squadron.

In 1995 a major restoration of Prize was commenced. In comparison with many of the restoration projects associated with northern hemisphere yachts the New Zealand built craft are generally in better condition.  This fact has resulted from them being built with the famous New Zealand Kauri timber; as well as the climate of New Zealand being so much more moderate.  Here in New Zealand we do not have the great extremes of a continental climate with high summer temperatures and snow and ice in winter. The yachts are generally sailed all year round and are therefore kept in a permanent state of saturation in salt water.  The great majority were also built using the three skinned construction method which enabled their hull form to be more easily maintained with no deterioration of fabricated steel ribs and or cast iron frames etc.

She was relaunched late in March 1996.  Prize was a new ship: dry, strong, and totally revitalised.  The winter series of 1996 was sailed in fresh conditions, weather in which, a year previously, you would have stayed at home.  She promptly won the 9 races series. January 1997 saw a new sail combination and she was seen to be fast; once again a match for her old rivals who, earlier in the season had new sails made.  She has proven to be fast and high pointing up wind in moderate to fresh winds.  She reaches exceedingly quickly under the Yankee and in the light while flying the Yankee able to match her rivals up wind.

The 1990s has seen an ever increasing interest in the older yachts in New Zealand.   The Classic Yacht Association of New Zealand was formed in 1995 by Chad, John Gorter, Hamish Ross and Greg Scopas.   This association now has 200 members who own nearly 100 classic yachts.   There race program extends year round with over 25 events being run.

As mentioned earlier the New Zealand designed and built classic yachts are fortunate in that with the magnificent native timber, Kauri, from which they were built and the temperate climate they have been able to survive in such good condition.   Losses to the fleet have been from ship wrecks or departures overseas rather than falling into disrepair.   Prize is a fine example of everything special about New Zealand classic yachting.   She arrived late on the scene with many of her rivals that she races against today having been built around the turn of the century, and incorporates many of the fast design features of her predecessors.   Many of these yachts are now also being restored or nearing the time when that work should commence, especially if they intend to carry on racing in the manner which they are now competing, fast and furiously (as always).  Prize at least is ready to take on all comers.

Bressin Thompson owned Prize for 57 years, and she is now cared for by the Thompson family.   The care and attention bestowed upon her in the past, present, and into the future will see her gracing the Waitemata Harbour for a great many years to come.

Brest: the world’s largest maritime festival in photographs by Nigel Pert & Dan Houston with a … END_OF_DOCUMENT_TOKEN_TO_BE_REPLACED