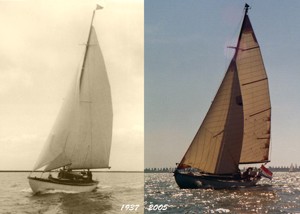 They delivered mahogany to the yard by themselves, which was probably the reason that W Kings didn’t want to build Phynella. 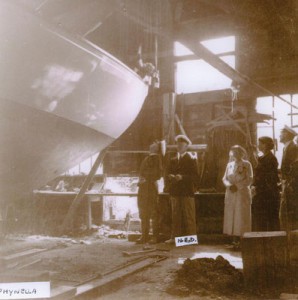 Dan Webb finally built her. She had a movable bulkhead to suit different requirements down below.
Phynella won the Town Cup in 1937.

Owners:
Horace Pitcher
Branklet, Priest’s Lane. Shenfield, Essex.
Frank Pitcher
Braeside, Brookstreet Hill
Brentwood, Essex.
They sold her in the fifties to “Mick the Brick” who sailed on her in Tollesbury.
1965: Reg.’65.
as ’65.
1979

The good old Perkins was suffering. Replaced by a 3-cylinder 38 BHP Volvo Penta

2003: Took part at the second Dalli-Rally in Ipswich.

2005: Phynella sailed to the Dallimore diner in Burnham on Crouch.

2006: Phynella sailed to the Mediterranean and was the home for the happy family. She overwintered 3 months in Venice.

2007: Phynella’s 70st birthday!
Phynella left Venice in March and is on her way back to the Netherlands.

Brest: the world’s largest maritime festival in photographs by Nigel Pert & Dan Houston with a … END_OF_DOCUMENT_TOKEN_TO_BE_REPLACED