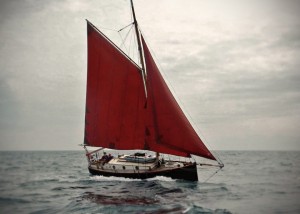 Built in Falmouth, the Tamarisk 29 is the only size in the Tamarisk design that was based on Falmouth Working boat lines. Phoebe has previously been owned and sailed by Mr. Frank Doyle, ex-launch officer of the Exmouth RNLI lifeboat and long standing member of the Exe Sailing Club. In 2015 the boat was bought by Kristian Butler, who attended Falmouth university studying BA tons Film and graduated in 2010, with a 16mm black and white film capturing the struggle of the Fal Oyster industry.

‘Mouette’ focuses on an Oyster fisherman’s daily life as he reflects on times past and worries of the future. The film was partly made with the help of local oyster fisherman and activist Chris Ranger on Alf Smithers. Kristian is sailing Phoebe in Falmouth Classics 2016.

Brest: the world’s largest maritime festival in photographs by Nigel Pert & Dan Houston with a … END_OF_DOCUMENT_TOKEN_TO_BE_REPLACED