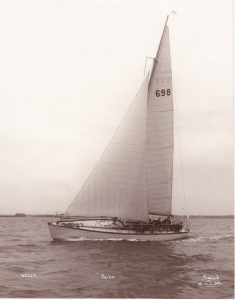 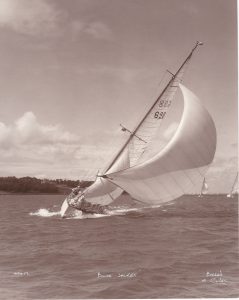 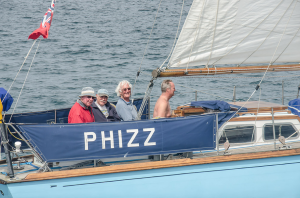 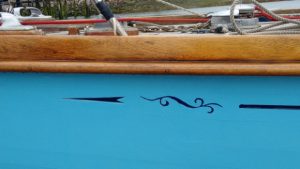 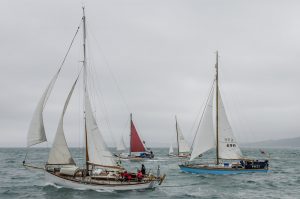 At the Start of Dartmouth to Paimpol Cross Channel Race 2015 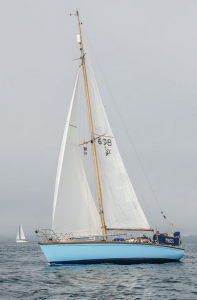 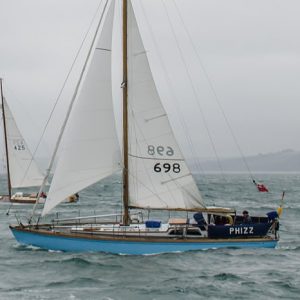 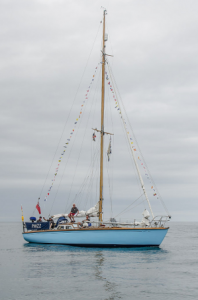 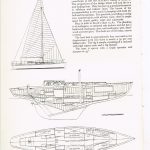 “The design shows a short-ended boat with good free board, a straight sheer and a small sail plan which contributes to her low R.O.R.C. rating of 27.22 ft. The proportions of the design blend well and she is a nice looking boat. Phizz has put up a good performance in off-shore and inshore races.

The layout of the accommodation is very much in keeping with both the hull and the sail plan. It is practical, providing a racing crew numbering six with all they want; there is ample space for charts, galley, toilet and cupboards. Phizz is built to Lloyd’s Class 15 A1. The planking is of mahogany on steamed oak timbers and she has a laminated mahogany stem and mahogany keel, deadwood and stern post. The decks are of red cedar, canvas covered. The lead keel is approximately four tons and as the displacement is 8 tons there is nearly a 50 per cent ballast ratio. The rig is simple, consisting of a mainsail with high aspect ratio and a big foresail. The mast is spruce with a single spreader and jumpers at 45 degrees.”

Words from the owner, Phil Knight-Jones

“Between 1951 and 1960 Phizz / Bluejacket raced in many RORC Class II offshore races. She accumulated over 500 RORC points and sailed more than 10000 race miles.

In her racing life she competed in the Fastnet race 4 times. She won the R.E.Y.C Challenge Cup in 1952 as the Yacht with the most RORC points in the season. Her race record (as taken from yachting world annuals) is in the summary below.

In 1960/1 Bluejacket was renamed Phizz and she spent her time cruising and probably racing from Lymington until my brother and I bought her in 1971, since then we have cruised her extensively and have been entering Classic Yacht Races since 2011. 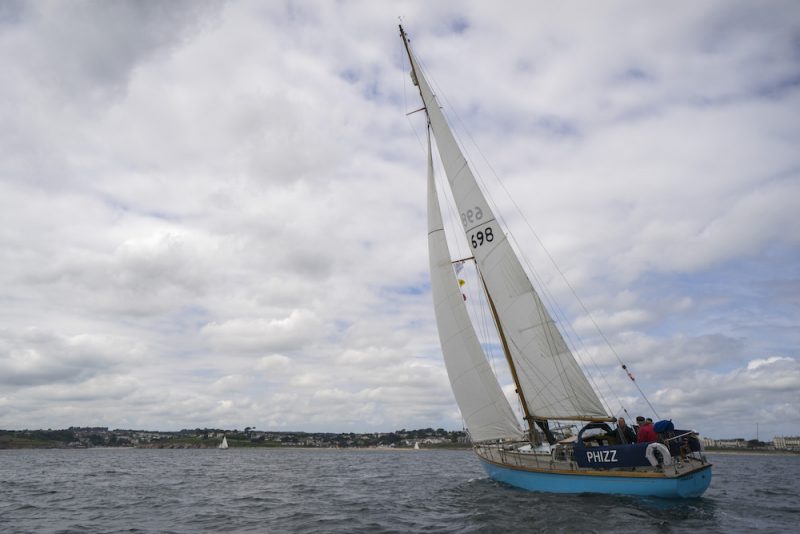 I see Rocquette is listed on your website and her history as Bluejacket III would also be interesting to follow up. I believe that after D J Maw had finished racing the Bluejackets they were sold and reverted to their original names just as Phizz has done. Rocquette is a charter yacht in the Med today.

It is believed that Clair De Lune recently grounded and possibly sank after hitting a rock off Brisbane.”

Phizz has been restored to the original specification with the exception of the canvas covering on the decks, this is now teak covered.

Brest: the world’s largest maritime festival in photographs by Nigel Pert & Dan Houston with a … END_OF_DOCUMENT_TOKEN_TO_BE_REPLACED