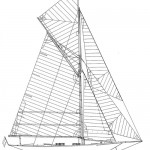 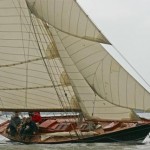 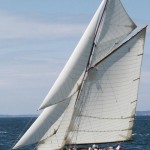 The very first owner was Mr Neil Balfour (although according to the Lloyds Register of 1900 the owner was actually Campbell M Keir) who in 1898 had her built in Ireland by Cummins & Bros. and named her ‘Yum’. Four years later he sold her to Monsieur Hachette who changed her name to ‘Griselidis’ just to sell her shortly after to a gentleman from Le Havre whose name still remains unknown.

Later Pen Duick was bought by a member of the Cercle de la Voile de Paris. His name was Monsieur Mac Henry who sailed her on the Seine river up to qui Meulan, close to Paris.    In January 1907, Mister Pierre Tacon purchased her and just six months later sold her to Georges Rus, who registered her under the name of Magda.

In 1909, Monsieur André Raillard took possession of her and named her Griselidis, flying the burgee of the Société des Régates de Brest. In 1913 the boat changed owner again being acquired by Monsieur Cailleux, but she remained four years without actually sailing during World War I.

It was Monsieur Jacques Richepin who took her back to Brittany, where she was later owned by Mr Ganuchaud and Mr Le Goff.   The boat changed name again and became ‘Astare’, then ‘Panurge’ in 1931.   She was taken back to Le Havre in 1933 as ‘Butterfly’ and finally on July 17th 1935 she was renamed ‘Pen Duick’ by her new owner Jean Lebec.

In 1938 she lay abandoned on the Loire river bank when Guy Tabarly acquired her and delivered her to Eric Tabarly who became her fourteenth owner in 1952 when his father gave her to him as a present. The wooden hull was too ruined by the long war years spent in a shed at the Costantini shipyard in La Trinite sur Mer to go back into the water. Eric Tabarly thus chose to build a new fibreglass hull, using Pen Duick as a male mould.

It took three years for the Fife designed boat to get back to shape and before Tabarly could get her sailing, having returned from his circumnavigation on board the French Navy’s ship ‘Jeanne d’Arc’.   In 1959 Pen Duick took part in a RORC event in the UK and from 1962 to 1983 she underwent more works at Raymond Labb’s shipyard in Saint Malo.   On July 6th 1989, having spent time at Cantieri Beconcini in La Spezia, the cutter was equipped with a brand new Oregon Pine deck as well as a new set of sails produced by Victor Tonnerre.   After Eric Tabarly’s death in 1998, the boat went into his daughter’s care and today is one of the main attractions at the Cité De La Voile, Lorient.

Brest: the world’s largest maritime festival in photographs by Nigel Pert & Dan Houston with a … END_OF_DOCUMENT_TOKEN_TO_BE_REPLACED