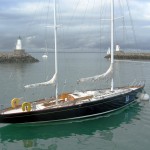 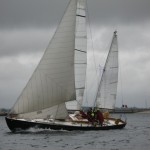 Tabarly raced with Pen Duick II in the 1964 edition of the OSTAR (Portsmouth – Newport) and won, with a time of twenty-seven days and three hours. This achievement earned Tabarly instant fame and the rank of Chevalier de la Légion d’honneur. He received the Blue Water Medal for his victory.

In 1965, he earned his Commandos Marine certification. The same year, he transformed Pen Duick II into a wishbone schooner. The next year, Pen Duick II was shortened to match the regulations of the Cruising Club of America, and Tabarly single-handedly sailed her to New York. He achieved a 5th position in the Bermuda Race, and raced in the Bermuda-Copenhaguen race, but had to abandon with a ruptured rudder.

Brest: the world’s largest maritime festival in photographs by Nigel Pert & Dan Houston with a … END_OF_DOCUMENT_TOKEN_TO_BE_REPLACED