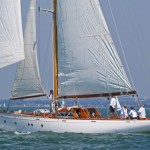 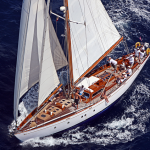 She was first registered in British waters (Guernsey) in 1979. Little is known of her history from 1956 to that time but it is believed she remained in the ownership of the family who had originally commissioned her. There have been 8 owners.

In 2004 her present owner looking for a boat to cross the Atlantic, found Pazienza, no stranger to Atlantic crossings her previous owners had taken her to the Caribbean in 2002 and back in 2003, then to sell.

Since then she has crossed the Atlantic twice, in 2005 in the Atlantic Rally for Cruisers and again in 2008 in the Transat Classique Lagasse. On both occasions Pazienza has proved an extremely sea worthy boat, taking care of all those who sail her.

Brest: the world’s largest maritime festival in photographs by Nigel Pert & Dan Houston with a … END_OF_DOCUMENT_TOKEN_TO_BE_REPLACED