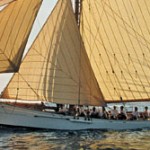 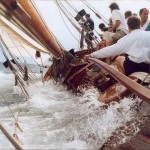 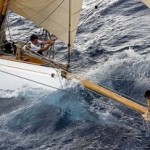 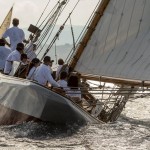 Alex Laird restored Partridge over a long period of 20 years on the Isle of Wight and she made her debut at the Mediterranean regatta circuit in 1999.   In the same year Yachting World wrote an article on Partridge and described her as “one of the prettiest gaff-rigged cutters in existence” and “she’s fast, very fast”.

In the following years she proved great on-the-water-competition for the Nicholson cutter, Avel,  but eventually had to reduce her participation in the regatta scene due to a lack of time and other commitments. She went on to be berthed in in La Ciotat, France where Alex Laird set up a restoration yard, ‘Classic Works’. Her current owner lives in Monaco and ‘Classic Works’ still look after Partridge.

Partridge won the Rolex Trophy at Les Voiles de Saint Tropez 2014 and is this year (2015) celebrating her 130th anniversary and will be attending Monaco Classic Week and Les Voiles De Saint Tropez.

Brest: the world’s largest maritime festival in photographs by Nigel Pert & Dan Houston with a … END_OF_DOCUMENT_TOKEN_TO_BE_REPLACED