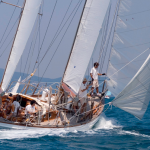 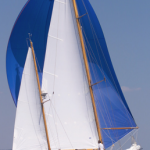 Arne Frisell, KAY’S original owner, selected Aage Walsted to build her on Rod Stephens’ strong recommendation as the best; then spending much time at the Walsted yard during the build. Having declared she was to be his last yacht; on completion he departed in her – more than satisfied – for the Mediterranean. On arrival there, in short order as he tied up, the man who took his lines, apparently already seduced by KAY, invited Arne to sell her to him. After much discussion with this potential buyer, who was unwilling himself to get another built, Arne decided to accept his offer; considerably more than he had paid, plus expenses and sufficient incentive to go back to Walsted himself. Thus two near identical yachts were built for the same owner – who had of course some explaining to Aage Walsted. He, while surprised that KAY was not to be Arne’s final yacht, was very pleased at the turn of events.

Brest: the world’s largest maritime festival in photographs by Nigel Pert & Dan Houston with a … END_OF_DOCUMENT_TOKEN_TO_BE_REPLACED