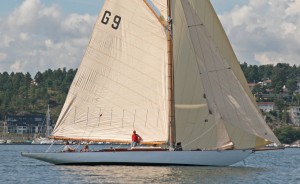 Pandora is probably the first R boat in the World, built to the first R Rule of 1907. Johan Anker was one of the architects behind this rule, which was agreed upon in London in late 1906 and operating from 1907. During the winter 1906 / 07 the Anker & Jensen shipyard in Norway had 11 big boats built; 8 of them to the new rule. Pandora was also the first to be completed and was launched in February 1907.

During her 100 year – nay 104 year history she has only had 8 owners; one of whom was for 30 years and another for 28! This is probably one of the reasons why she is still very original and in great shape.

She was originally gaff rigged, but then rigged as a Bermuda in 1921, and stayed that way for about 80 years, winning several races meanwhile.

In 2001 she was re rigged back to gaff, and awarded the special prize for “Best sailing yacht” at Risør woodenboatfestival in 2007.

Brest: the world’s largest maritime festival in photographs by Nigel Pert & Dan Houston with a … END_OF_DOCUMENT_TOKEN_TO_BE_REPLACED