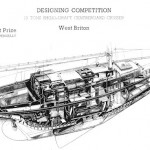 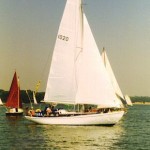 The vessel had major restorations in 1982, 1990 and 2000 and is now in excellent working order. She is believed to be the only West Briton shoal draft cruiser to have been built and was designed for and won the Yachting World shoal draft cruiser design competition in 1949.

“I came across this ad which thinks that the Ostara is the only one of the  YW design winners ever built. One other was built in Brisbane, Australia by Jack Clark for my Godfather, Trevor Early. She was launched in 1954 and named Sonda Q. She was intended to be called Sonda but wanting Lloyd’s Registration it needed to be distinguished from the McGruer yacht Sonda, so a Q was added. Much of the construction was done at weekends by Trevor, a furniture manufacturer and my father Buster. I spent many a happy Saturday afternoon picking up the dropped copper roves and nails from the mud of the Brisbane river and learning about yachts by sitting and listening to them. She was sold when Trevor died in the 1990s.” – Richard Zoeller

Brest: the world’s largest maritime festival in photographs by Nigel Pert & Dan Houston with a … END_OF_DOCUMENT_TOKEN_TO_BE_REPLACED