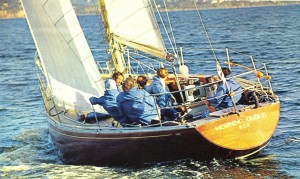 This is the second Morning Cloud designed for Sir Edward Heath. She is a relatively small boat but met the requirements of the Admiral’s Cup. Rod Stephens spent the first couple of weeks sailing with her right after her launch getting the bugs out.

Also of interest, this is the exact same hull shape as used for the Huisman 41, with a cruising deck and interior and built of aluminium.

Towards the end of the seventies Opposition was sold and started her life a cruising yacht spending some time in the Mediterranean.  The heat of the Med did not suit the boat well and she returned to the Clyde in the mid-eighties to lie on a mooring in Tarbert in Loch Fyne.  She was lightly used during this period and towards the end of the eighties was brought ashore for a major refit.  She remained ashore for several years where she suffered further during several hot summers under cover.  In the mid nineties she was then sold to the current owners(2012) late brother-in-law and was once again made sea-worthy and continued her life as a cruising yacht in the West of Scotland.  Within a couple of years the current owner bought an interest in Opposition eventually becoming the outright owner and she continued to be used for cruising in the Clyde and the waters of the West Coast of Scotland.

By the Spring of 2007 it became clear that Opposition had become very tired indeed.  Perhaps this is not surprising given that she was now 36 years old and as an out and out racing yacht had perhaps only been built to last five or six years.  That summer, discussions took place with Lallows and the decision was made to return the boat to her birthplace to undergo a complete restoration.  She arrived back in Cowes for the first time since the seventies at the end of Cowes week that year and a few days later was hauled ashore up into Lallows shed to commence her re-birth.

The following Spring she returned to the water looking every bit as splendid as she had done some thirty seven years before and resumed her racing career a few weeks later by entering the JP Morgan Round the Island in which she came third in her class.  Her return to the sea was celebrated with a party at the Royal London where all her original crew, with the exception of Edward Heath who had passed away, were able to see her.  We were very privileged in particular to have Owen Parker raise a glass to Opposition.  Owen had suffered ill health for some time and sadly this was to be the last time he would be seen in public but perhaps this was a very special occasion for him.  Opposition is now to be seen participating in classic races and regatta in both the waters of the Solent and the West Coast of Scotland.

Brest: the world’s largest maritime festival in photographs by Nigel Pert & Dan Houston with a … END_OF_DOCUMENT_TOKEN_TO_BE_REPLACED