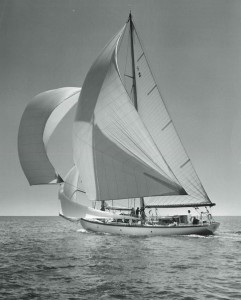 Built for the “Race to Spain”.

She was the first American Vessel to win the Fastnet Race in 1928.

Missing at sea on 6/7/2013 en route from New Zealand to Australia with 7 crew on board.   The owner and Captain David Dyche III(58), his wife, Rosemary(60) and their son David IV (17) were amongst the crew who had ‘the weather turn nasty’.   Advised to ‘head south and brace for a storm with strong winds and high seas’ was the last known communication with the crew on board.

Over a month later the search continues with the hope of locating a liferaft.

Brest: the world’s largest maritime festival in photographs by Nigel Pert & Dan Houston with a … END_OF_DOCUMENT_TOKEN_TO_BE_REPLACED