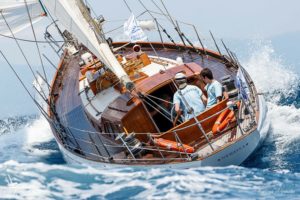 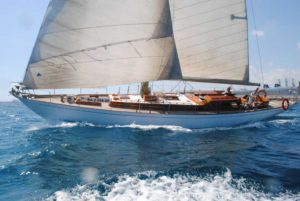 Nerissa was commissioned as “Mistress Quickly” by Mr. W. Whitehouse-Vaux and built in Italy.   While under construction, the owner disappeared for two years and the building was stopped.   Voices say that he was a spy for the UK, on a mission in Russia!

Later, the boat was owned by Count Cinzano (of Martini…) Originally, Nerissa was a yawl.   Three years after her launch, the mizzen was taken off and since then she has sailed as a sloop.   Her impressive round cornered dog-house was a real nightmare for the Yard to build, but they succeeded and now it constitutes her major feature.

Brest: the world’s largest maritime festival in photographs by Nigel Pert & Dan Houston with a … END_OF_DOCUMENT_TOKEN_TO_BE_REPLACED