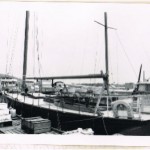 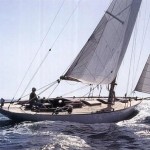 Designed by Nathanael Herreshoff for his own doctor. She made an ill-fated attempt to leave Rhode Island to sail across the Atlantic, but was blown back by storms. The result was that she was converted to a yawl. In 1921 Neith cast off once again with a record-breaking crossing of the Atlantic, departing from Halifax, Nova Scotia and completing the trip in 25 days. She was skippered by her then owner, Commander Houghton.

On arrival to the UK and at the suggestion of the famous yacht designer Charles Nicholson, her owner gave her a Marconi rig.
“My grandparents were friends with the Houghtons and my grandfather often crewed the boat when she was in England, including in 1922 when Neith competed at Cowes and won on August 7th that year”.
Information courtesy of Virginia Tweedy

She remained in Scotland until 1970 when she returned to the US. There she sank and was abandoned on the Connecticut River.

The yawl’s third owner rescued her and had her meticulously restored to the extent that she participated in the Herreshoff Rendezvous in 1981.

In 1983 she was sold to her current owners(2017) and given a full restoration to return her to her original condition. Another followed in 1993.

Brest: the world’s largest maritime festival in photographs by Nigel Pert & Dan Houston with a … END_OF_DOCUMENT_TOKEN_TO_BE_REPLACED