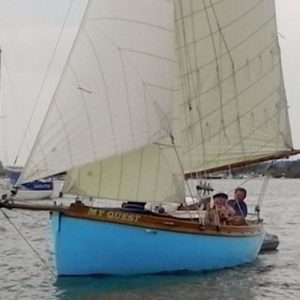 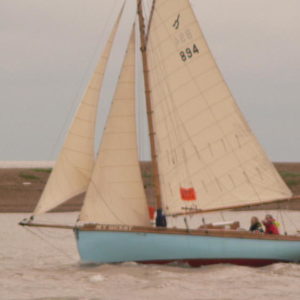 My Quest in one of only two hulls built to a design by Mr G Cozens.

The first hull, Swift, by Messrs Anderson, Rigden and Perkins of Whitstable Kent was a day cruiser with a small cuddy forward built in 1929, for Mr Claude Worth, of ‘Tern’ fame.

As a direct result of an article about her maiden delivery voyage down to the Hamble, published in Yachting Monthly August 1929, the second hull was built, with a cabin, at Horning, Norfolk, 1930. Launched as ‘Melody’, she was bought from the yard new by a Mr H J Suffling the same year. He renamed her Quest and based her on the River Deben.

She was bought by a Mr William Taylor around 1947 and remained in his ownership until approx 1967. The story goes that he sold her for a short period in the 1950s bought her back then renamed her My Quest in 1953.

She has been owned by Richard Gavin since 1984 and cruised extensively since then, visiting the Scilly Isles, Brest and Douananez, The Channel Islands and as far north as Den Helder to name but a few. Her auxiliary engine was removed in 1996 and she has remained engineless ever since. My Quest was sold in 2014.

Information courtesy of the OGA.

Brest: the world’s largest maritime festival in photographs by Nigel Pert & Dan Houston with a … END_OF_DOCUMENT_TOKEN_TO_BE_REPLACED