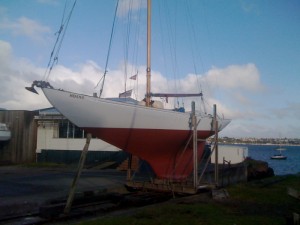 In the 1930s her deck was raised by 9 inches by the addition of a solid plank all round, but otherwise her hull is exactly as launched.   She has had few comforts added,  just a head and cooker, but there is still no motor and she is sailed traditionally.

From a 1964 Regional memoir by Evelyn Hosken of Simons Hill Station, near Lake Pukaki – Mrs Hosken has a recollection of a Timaru Doctor William Cochran BURNS M.D. who practiced medicine in South Canterbury for nearly 50 years and who died aged 85 years in November 1960. Below are some extracts from the memoir called ‘Life on a Five Pound Note’. 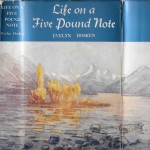 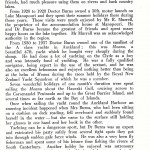 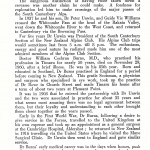 Moana was long associated with the Miller family of Auckland and flew the Commodore’s burgee of the Royal New Zealand Yacht Squadron at one stage.

The Smith brothers have now owned Moana for over 30 years and they have all contributed to her ongoing maintenance, treating her as part of the family. They would like to see her converted back to her original gaff rig.

Brest: the world’s largest maritime festival in photographs by Nigel Pert & Dan Houston with a … END_OF_DOCUMENT_TOKEN_TO_BE_REPLACED