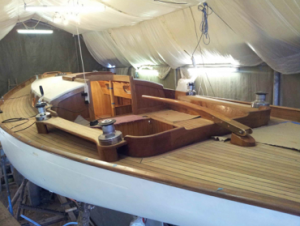 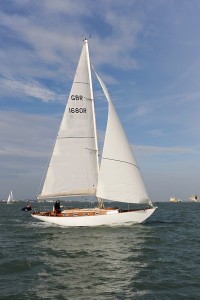 “…she was built as a demonstrator for Ratsey and Lapthorn, and took part in the 1965 Fastnet.

She had three sisters, all of which were built around the same time as Misty, but at the Cheverton yard.  I have no idea how many are still in commission, but I believe at least one is.

Misty is a purpose-built ocean racer, albeit at the standard for 1965, so she has a full displacement hull.  Misty and her sisters were the largest yachts Cheverton ever designed.”

“Misty was built to be an improvement over her sistership ‘Danegeld’ but proved to be no faster.

Although Misty was built by Lallows the deck and coach roof were made by Wally Smythers an employee of Ratsey & Lapthorn.

The engine was an Italian diesel situated in the saloon just aft of the mast.

The mast was made by Britten Norman who made light aircraft at Bembridge on the Isle of Wight.

The steering gear box came from a Ford truck and Mark Ratsey-Woodroffe made the rigging using Norseman terminals.

He remembers being up the mast fitting the rigging”

Misty is undergoing an extensive restoration at A&R Way Boatbuilders in Scotland (2012).

Brest: the world’s largest maritime festival in photographs by Nigel Pert & Dan Houston with a … END_OF_DOCUMENT_TOKEN_TO_BE_REPLACED