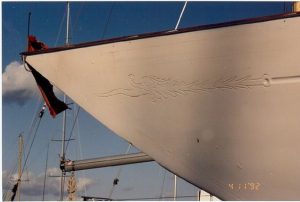 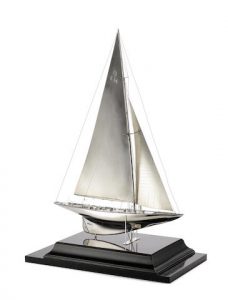 Silver model of Miquette by Benzie of Cowes

Built according to the Third International Rule for RS Grigg.

For “the opening of the 1934 season there was great attention for the new boat as the results of the last Twelves from the yard were disappointing. Her debut at the Burnham-on-Crouch races is a winning one against Veronica. In the season’s overall results, she was third (one point off the second position) after Westra and Flica with 37 starts and 10 firsts, 9 seconds and 8 thirds.” (Information courtesy of www.12mrclass.com)

Over the years Miquette has changed hands up to a dozen times until finally in 1991 she was bought by the classic yacht enthusiast(and subsequent Fife design archive owner) Albert Obrist. She was laid up on the Hamble outside the Fairlie Restorations shipyard in anticipation for a new owner that would take advantage of the world class facilities that Duncan Walker and his team could provide.

However, in 2013 she was bought by Allan Dyke who embarked on a three-and-a-half years restoration project in his workshop.

Her first regatta appearance is planned in September at the Regates Royales regatta in Cannes.

Brest: the world’s largest maritime festival in photographs by Nigel Pert & Dan Houston with a … END_OF_DOCUMENT_TOKEN_TO_BE_REPLACED