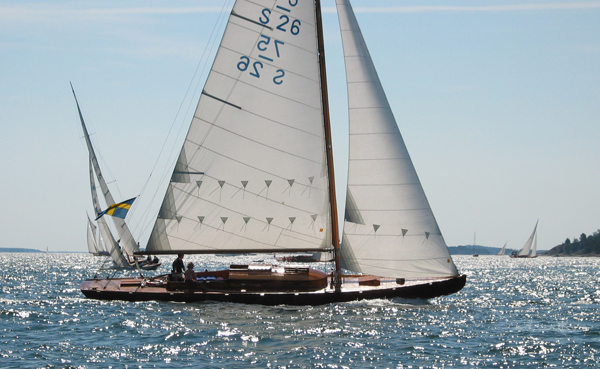 “Mazurka is carefully built – she is still there – and the original owner, Holtermann, was certainly not satisfied with less. He was a central figure in that time’s CSSS and acquired the nickname “Pjoltermann”. On the other hand, Anderson does not seem to have succeeded completely in the construction. The boat seems to have been thought to get the 4.9 or 5.0 metrics according to the cube rule, thus Mazurka would belong to the biggest Class IV cruisers. However, with her waterline length of 8.29 m and 79.69 m.sq sail area on her gaff rig, the measurement was just over 5, placing Mazurka in Class III. She was there to compete against boats with measurements of up to 10, which roughly corresponds to a 120 Square Metre. Mazurka also did not fair well in regattas and after a few years she was rigged with an increased sail area to 84 sq.m.”

In the summer of 2014 she sailed for the first time since 2011 and the latest renovation with, among other things, a new hull to take care of the forces of rig and mast, gave results. In her second race she won!

Brest: the world’s largest maritime festival in photographs by Nigel Pert & Dan Houston with a … END_OF_DOCUMENT_TOKEN_TO_BE_REPLACED