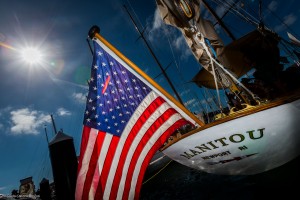 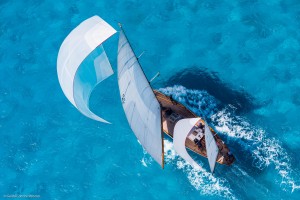 In 1936 Mr. James Lowe of Grand Rapids, Michigan, commissioned the young Naval Architect, Olin Stephens, to design him a boat that could win the Chicago-Mackinac Race.

Launched in 1937, Manitou fulfilled the owner’s desires breaking the elapsed time record and winning the 1938 Chicago- Mackinac Race and also winning handily on corrected time. She was second across the line in 1939 and first again in 1940 and 41.

When Mr. Lowe was commissioned in the U.S. Navy in the summer of 1942, Manitou moved on.

In 1956 she was donated to the U.S. Coast Guard Academy where she was used to teach the cadets seamanship, sailing and how to work together as a crew. It was there she came to the attention of Tazwell and JFK.

Jack Kennedy was a sailor at heart and sent naval aide, John Tazwell, in search of a suitable sailboat for Presidential use. With her good looks and pedigree, Manitou was quickly selected. She was brought to Chesapeake Bay and fitted with all the proper radios and communication equipment so the President would never be out of touch with his office or even the Kremlin while on board.

Jack Kennedy used her often there and in New England.

Brest: the world’s largest maritime festival in photographs by Nigel Pert & Dan Houston with a … END_OF_DOCUMENT_TOKEN_TO_BE_REPLACED