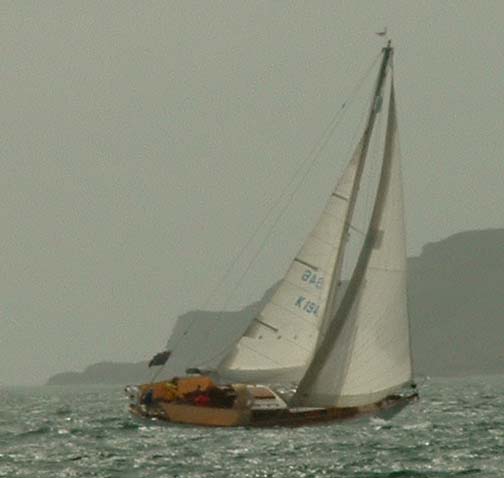 Legend has it that he was lost overboard from his previous yacht whilst racing off the north Brittany coast.   He was rescued in the Chenal de la Malouine, off L’Aberwrac’h, foreswore racing and commissioned Alan Buchanan to design a cruising yacht.

Malouine was the first of six Prior 37’s to be built.   She is built of full length teak planks over canadian rock elm with bronze floors and a lead keel.   Deck beams are sitka spruce.   She was re-decked by the current owners in 2001.

Malouine was kept in Chichester Harbour and subsequently moved to the west country under the ownership of Douglas Gill.   She has crossed the Atlantic and sailed to the Faroes.   The current owners keep her on the west coast of Scotland where she visits Scottish islands, Scandinavia and the Baltic.

Brest: the world’s largest maritime festival in photographs by Nigel Pert & Dan Houston with a … END_OF_DOCUMENT_TOKEN_TO_BE_REPLACED