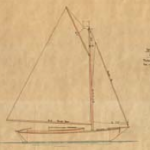 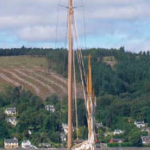 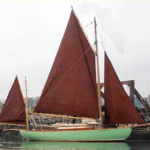 Over the winter of 1908 to 1909 she was lengthened aft by about 4 feet 6 inches on deck, being given a canoe stern and a yawl rig.

She was first owned by D B Anderson who lived at Cove (near Kilcreggan), and apart from a brief interlude in Newcastle and latterly in South Queensferry, she has remained on the Clyde for most of her life.

Thanks to her being bought by Gladys Coulson of Kilmun in 1933 she came to have a special place in the history of yachting on the Clyde. Gladys in due course married Ian G Gilchrist, a famous photographer. Maid of Lorn became the family boat and subsequently featured strongly whenever a photo of a cruising yacht was required, for example in the Yachtsman magazine, and notably in Peter Heaton’s Cruising published by penguin books in 1952, the cover of which features an illustration of her, loosely based on a photograph to be found inside.

A major restoration was undertaken by John Hill at the Clyde River boatyard between 1992 and 1997 M and she has been returned to her original 1909 configuration. She still has her original sail wardrobe
from 1909 (pictured), although she now sports a complete new set of sails purchased in 2008.

Brest: the world’s largest maritime festival in photographs by Nigel Pert & Dan Houston with a … END_OF_DOCUMENT_TOKEN_TO_BE_REPLACED