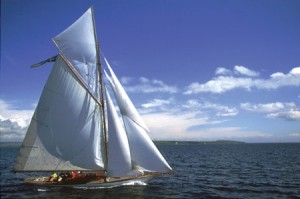 Built for the Norwegian businessman Alfred Larsen who had a series of yachts all named ‘Magda’. Later owned by Bror Blixen, married to the famous Danish author, Karen Blixen.

In 1979 Bo Eriksson of Sweden bought ‘Magda IV’ in Stockholm and sailed her 350 miles North to Örnsköldsvik.   There she was stripped from her original interior and given a Bermudan rig.

In June 1998 ‘Magda IV’ was shipped on a cargo ship from Sweden to Brest, France, where she participated in the “1998 Brest Regatta” and 100 year celebration of Eric Tabarly’s ‘Pen Duick’. She remains under the same ownership and now has her gaff cutter rig back and continues to be based in rnsk ldsvik.

Brest: the world’s largest maritime festival in photographs by Nigel Pert & Dan Houston with a … END_OF_DOCUMENT_TOKEN_TO_BE_REPLACED