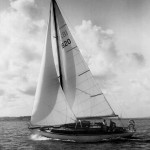 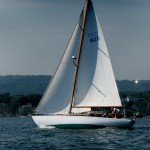 The year she was launched, Loosestrife was declared “Queen” of London’s Earl’s Court Boat Show and profiled in Yachting magazine.

For the first 20 years of her life, Loosestrife, nee Killicrankie, was sailed by her original owner in the English Channel and maintained by the yard where she was built.

She was then sailed to Maine and spent the next five years cruising New England waters during which time she also made two passages to Bermuda and back.

David Crosson purchased Loosestrife in 1987 and sailed her for 13 years on the Chesapeake Bay. Loosestrife was returned to Maine in 2000 and has been sailed there since. She showed a significant turn of speed with a second place trophy in the 2007 Eggemoggin Reach Classic Yacht race.

Loosestrife was originally christened Killicrankie; an allusion to a battle of the Glorious Revolution in Scotland. The perhaps apocryphal story told by the original owner is that the Killicrankie name actually arose from occasional conflicts between the vessel designer and builder when one (or the other) got so cranky as to verge on killing the other.

When Killicrankie reached America, she was renamed Chariot by her new owners who were smitten by Charlton Heston driving a chariot pulled by four foaming white steeds in the movie Ben-Hur.

Chariot became Loosestrife because the name change precedent had been set, and her current owner likes the look of Purple Loosestrife flowers. These plants also are British imports and thrive by water. More important, the word actually means freedom from strife.

Brest: the world’s largest maritime festival in photographs by Nigel Pert & Dan Houston with a … END_OF_DOCUMENT_TOKEN_TO_BE_REPLACED