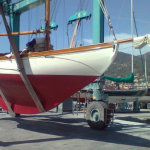 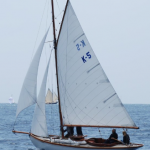 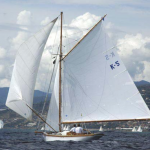 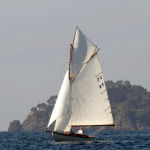 Previous owners include Hugh Tetley (tea) and Hartley (jam).   She was restored by her previous owner, Richard Meynell (2005).

She was featured as a Centenarian in Classic Boat 2005.

March 2005 – Lona II is now sailing in Italy and owned by an Italian.

All information can be found on Lona II Website

“Thanks to one of her most recent owners Lona II now has her original gaff rig back, having been converted to a Marconi in the 1960s. One of her first owners was Lieutenant Michael Barne who sailed with Robert Falcon Scott to Antarctica aboard Discovery in 1902. Lona II was hidden in a marsh in Essex during the second world war. Her former owners include tea merchant Hugh Tetley. In 2005 she was bought by dinghy sailor Maurizio Manzoli, brother of ocean yachtsman Franco “Ciccio” Manzoli. He moved her to the Mediterranean and had her restored there. She won the Cap Hornier Prize at the Vele d’Epoca at Imperia in 2006, thanks to her rig and interiors being so faithful to her original designs”. – Panerai Classic Yachts Challenge Archive

Brest: the world’s largest maritime festival in photographs by Nigel Pert & Dan Houston with a … END_OF_DOCUMENT_TOKEN_TO_BE_REPLACED