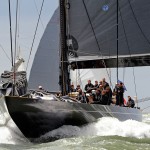 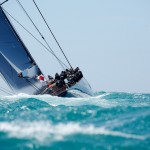 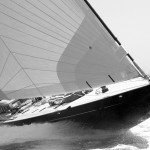 Originally designed in 1936 by Starling Burgess and Olin Stephens as one of seven models that was rejected for the ‘Ranger’ syndicate, she was never built. She is the largest J ever built at 46.75m and one of the so called ‘Super J’s’.

Fast forward to 2005 and Andre Hoek of Hoek Design got involved analysing the potential of the seven remaining hulls designed by Burgess and Stephens for the Vanderbilt syndicate. Using both state of the art computer models and now traditional water tank testing, Hoek advised to use hull 77-F as the one with the biggest potential. It is hull 77-F that has now been built as Lionheart, 75 years after she was conceived on the drawing boards.

The hull was eventually build by Freddie Bloemsma and Claassen Jachtbouw was responsible for building the yacht. She was launched 5 years after the project started, in the summer of 2010. She arrived at the racing scene in 2012 and showed great potential by winning the Kings 100 Guineas Cup in Cowes.

Brest: the world’s largest maritime festival in photographs by Nigel Pert & Dan Houston with a … END_OF_DOCUMENT_TOKEN_TO_BE_REPLACED