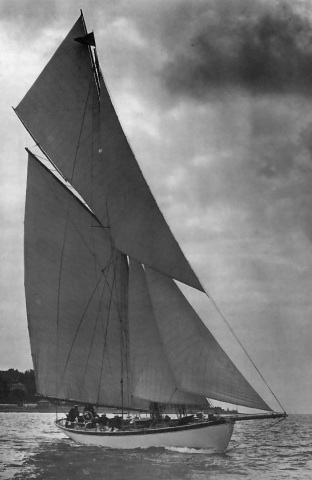 “I was one of the Sea Cadets that was fortunate to sail on Lily Maid. Gosport to Jersey if I recall correctly. Greenwich SCC mid 1960’s. Never left the sea connection.” Courtesy of Graham Knight
“BK Miles wrote about the Lilly Maid. I sailed on this beautiful boat three times with the STA; Cherbourg, Weymouth and Isle of White Race, in the 60’s, and was given a small award signed by Lord Amory. I have wondeful memories of this ship. What a great thing to do for a young lad.” Courtesy of Richard Jones
“In the early 1970’s I was an instructor in the Sea Cadets (Lt. B K Miles RNR District Staff Officer) and remember acting as 2nd mate on the Lilly Maid taking underprivilaged boys from London for a weeks cruise in the English Channel.
I think there were approx 6 boys and another RNR officer a Lt John Powell. the voyage was quite uneventfull but the boys were a very different bunch by the time the trip ended, not long after that the Sir Winston Churchill was commissioned and, as far as I can recall, Lily Maid was not used again by the Sail Training Association or the cadets.” Courtesy of BK Miles

“In one of my much earlier ports of call, Bundaberg, Queensland, Australia in 1984, I met a Lilly Maid (built to Thames measurement), and owned by an English couple.   The skipper/owner had just come across from French Polynesia with his family with a broken engine, entered into Australia at Bundaburg, Queensland, by sailing up river, anchoring off the wharf, and then warping alongside.   This was quite a feat as Lilly’s draft was 12/16 feet or so going from my hazy memory.   I can remember that they had used Lilly in the sail training (kids/scouts?) area, to try and help her pay for herself.   I last heard of her in Sydney, Australia.” Courtesy of a ‘self imposed armchair sailor’.

In 2012 Lilly Maid was in the Caribbean and for sale.

Brest: the world’s largest maritime festival in photographs by Nigel Pert & Dan Houston with a … END_OF_DOCUMENT_TOKEN_TO_BE_REPLACED