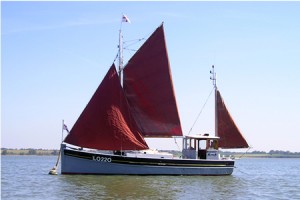 Built for the Dench family. Arthur Dench and his son Jim took her to Dunkirk in 1940 where the cockle men lifted about 1000 men from the beach and the mole. On the way back ‘Letitia’ narrowly missed being destroyed by a mine which blew up under the ‘Renown’ being towed in a line behind. So ‘Letitia is a ‘Dunkirk little ship’ and her owners can be members of one of the most exclusive and famous yacht clubs in the world.

In 1998/9 ‘Letitia’ was extensively re-built.   She retains her Ford 4-cylinder diesel engine, a big engine for trawling, which powers her along at up to 7 knots.

Brest: the world’s largest maritime festival in photographs by Nigel Pert & Dan Houston with a … END_OF_DOCUMENT_TOKEN_TO_BE_REPLACED