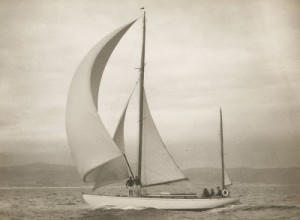 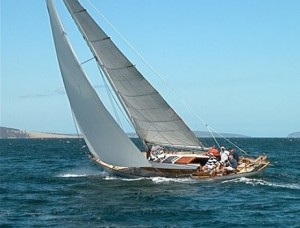 Commissioned by Guy Rex, she was the first Sparkman & Stephens buiilt for a client outside the US.   Originally a yawl, she was later converted to a sloop.

“This pretty yawl was designed in 1934 and built in Tasmania. One can easily see the influence of Dorade (design #7) and Stormy Weather (design #27) in her hull shape and how she fills the gap between these two early designs and Sonny (design #94) and Skylark (design #146), yet to be designed. Looking at the length/beam of these 5 designs, she’s narrow; proportionally almost as narrow as Dorade”, www.sparkmanstephens.blogspot.com

(2008)  She has an electric engine, removable wind turbine and strongrope sail handling systems.

Landfall has competed in the Sydney/Hobart race 4 times, finishing seventh in 1952, retired in 1954, and competed again in 1976, when she was 40, where she finished 52nd overall. In 2014 she returned for her fourth event and had to disappointingly retire from the race with sail damage that left her floundering at the back of the fleet.

“Landfall then went on to compete in the 2015 and 2016 Sydney Hobart races, along with over a third of the fleet landfall was forced to retire in the 2015 race, but sailed back to her home port without assistance.

In 2016 she led her division and also the Corinthians until being becalmed for 8 + hours in the river Derwent in sight of Hobart. Despite this her time was 13hrs+ in front of previous times in her history and arrived to a great welcome.
Landfall has since returned to her Sydney home port. We believe she is the only yacht of S&S which has ocean sailed continuously since launch in 1935, without rebuilding and just standard maintenance.” Mike Strong

Brest: the world’s largest maritime festival in photographs by Nigel Pert & Dan Houston with a … END_OF_DOCUMENT_TOKEN_TO_BE_REPLACED